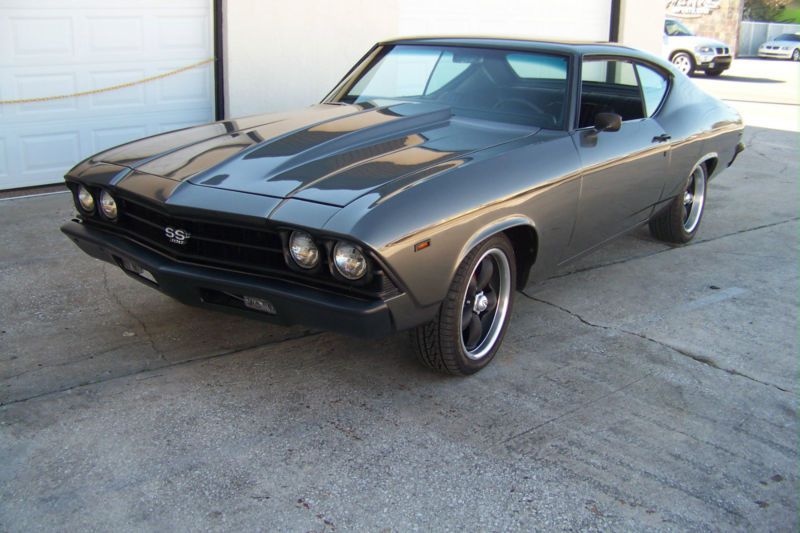 I am always available by mail at: deidredgghil@ukartists.com .

1969 CHEVROLET CHEVELLE SS396
NUT AND BOLT FRAME OFF RESTORED 69 CHEVELLE SS 396 THIS CAR HAS UNDERGONE A FRAME OFF
RESTORATION. THE FRAME HAS HAD ALL NEW EVERYTHING, FROM ALL NEW BRAKE AND FUEL LINES, NEW BRAKES AND BODY MOUNTS,
NEW STEERING AND BALL JOINTS, NEW BRAKES, FRAME WAS COMPLETELY PAINTED AND REASSEMBLED ORIGINAL 12 BOLT REAR WAS
SERVICED, ALL NEW BEARING AND SEALS.
THE BIG BLOCK MOTOR WAS COMPLETELY REBUILT WITH EST. 375hp
POWER STEERING ALL SERVICED
VINTAGE HEAT AND AIR CONDITIONING
THE 4 SPEED TRANSMISSION WAS GONE THROUGH AND SHIFTS GREAT
12 BOLT POSI-TRACTION REAR END ALL GONE THROUGH
TRUE DUAL EXHAUST WITH FLOWMASTERS AWESOME SOUND
POWER DISC BRAKES FRONT AND DRUMS IN REAR
17" CUSTOM COY'S WHEELS 17-8 FRONT AND 17-9 REAR
LASER STRAIGHT BODY WITH NO RUST ANYWHERE SATIN PAINTED FLOORS
CUSTOM
PAINT IS PEPPER GREY BASE COAT CLEAR COAT DEF. ( 9+ OUT OF 10 )
CUSTOM GAUGES ( ALL WORK)
A/C ( BLOWS ICE COLD )
NEW BUCKET SEAT SKINS FRONT AND REAR
NEW CARPET AND HEADLINER
THE CAR RECEIVED A COMPLETE RESTORATION ABOUT A YEAR AGO, CAR HAS ONLY A FEW HUNDRED MILES SINCE DONE JUST GOING
TO CAR SHOWS AND CRUISE - INS. THE CAR HAS LOTS OF POWER AND A REALLY COOL LOOK. TURNS HEADS EVERYWHERE IT GOES.
DON'T MISS OUT ON A GREAT CHANCE TO OWN THIS MUSCLE CAR. A ILLNESS HAS CAUSED THE SALE IF THIS CAR, SO IT WILL SELL
CALL ME FOR A BUY IT NOW OR FURTHER QUESTIONS ON THIS CAR.