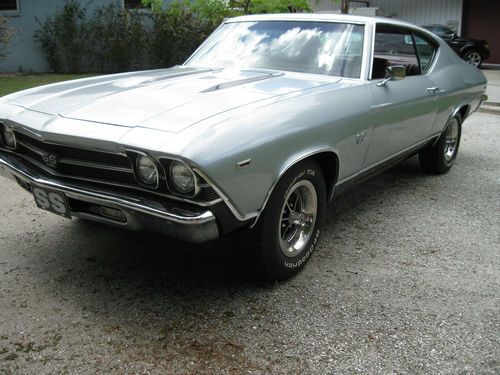 Condition: Used: A vehicle is considered used if it has been registered and issued a title. Used vehicles have had at least one previous owner. The condition of the exterior, interior and engine can vary depending on the vehicle's history. See the seller's listing for full details and description of any imperfections. ...
********************************************************************************************************
What you are bidding on today is KC of KC's Classic Cars, Bradenton, Florida, own personal ride! It is an UN-RESTORED ORIGINAL 1969 Chevrolet Chevelle SS 396, 375 Horsepower L-78, 4 speed, bench seat, 2 door hardtop. She was built for the original owner without any of the creature comforts, no power steering, no A/C, no AM/FM, just an AM radio that still works with a FM converter (remember those) in the glove box and that still works. Just built to go FAST!! The only power that she has is the horsepower and power disc front brakes! I, (KC) have owned her for almost 14 years and am the 3rd owner of the car. The owner that I got her from had her for 18 years and put about 500 miles on her in that period of time. It was a mid-life crisis car for him. He was about to hit seventy and couldn't drive the manual transmission any more. Since I have had the car I have installed:
A) New Centerforce clutch assembly
B) New flywheel
C) New exhaust system
D) New 15 inch (I hated the way the 14 inch wheels looked) SS wheels and     BFG T/A's ( 235 70R15) all around
E) Removed the engine 5 years ago, took it apart, new bearings and               resealed with new timing chain and oil pump, new water pump, mounts,     hoses, belts, and alternator, etc. Everything inside the engine looked like     new.
F) On the interior I replaced the front bench seat seatcover when I bought       her. There was a small tear where I couldn't get it repaired on the drivers     side. The drivers side door panel was faded so I replaced that also,             although I kept the old one. The drivers side kick panel was also                 replaced with a used one. At the time when I bought her there were no       new replacements. It is the same color, of course. That's it, in the                 interior. Everything else is original and in excellent condition.
G) The paint is Cortex Silver and Chevrolet had a problem with this color         during 1969. When it rained and the sun would come out the rain               droplets would magnify onto the Cortez Silver and dull those areas             causing Chevrolet to have to repaint any affected areas. This was one         such car. You car see (ever so slightly) that part of the car was re-               painted in the same lacquer paint and the same dulling in many areas         do still appear. There is no rust on the Chevelle and there never any rust     on her. I had the bottom black painted, that bottom strip 13 years ago to     make her look better. The black was faded. Check out the photos of the       car. There is one little dent at passenger side rear quarter     that was         there when I bought the car and small dent (smaller that a pencil                 eraser) near the top of the passenger front fender, near the door.
H) When I bought the car there was a Sun Tach with the sending unit that       did not work (still have it) and there was the old chain that was bolted to     the engine and frame (old school). The 3 gauges that were in the car           when I bought her are still there working great!
I) If you have any questions on my Chevelle, please call me at my shop at      941-747-1800 or on my cell at 941-713-2729. If you need any additional      photos of the car, videos, etc, just call, e-mail, and I have many other          photos of the car on KC's Classics Facebook page. There are some on        kcsclassiccars.com web site also.
Most of these 396/375 hp cars did not survive. They were blown up by their previous owners by drag racing. I can see some evidence of drag racing because of the drivers side rear wheel well trim being worn off on the front, probably from cheater slicks at some period if time. If this car could talk!
The one last thing I have to mention is that I took a loan for my shop expansion using my classic cars as collateral a few years ago and that when you purchase the Chevelle, I will just have you make a cashiers check out my lender so they can send you the title. You won't have to go through me.
There is no warranty implied here. Within 48 hours of the auction ending please place $500.00 in my Pay Pal account and I will get you the bank info ASAP.
You can pick up the car locally and I have the Chevelle for sale locally and have the right to end the auction early if necessary. You can have a shipper pick up the Chevelle as I have sold many of my babies over the years and many of the shippers know us very well. Good Luck on your bidding!!
KC