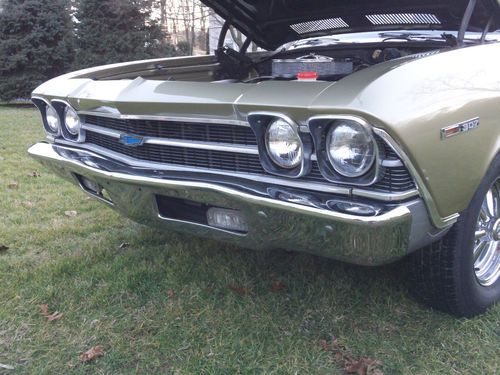 NO!! RESERVE AUCTION  HI BIDDER WILL TAKE IT!


PLEASE - DO NOT BID IF YOU ARE NOT READY TO BUY MY CAR!

I GOT BURNED 3 TIMES ALREADY !!! these posting's are not free!


UP FOR AUCTION IS MY 69 MALIBU CHEVELLE .

THE CAR WAS ORIGINALLY FROM SOUTHERN CA.

NEW PAINT TRIM VINYL ROOF AND ALL THE WEATHER STRIPPING

IT IS SHOWING IT'S AGE ON THE SEATS AND HEADLINER.

THE FRAME AND FLOOR AND TRUNK ARE ROCK SOLID!

RUNS AND DRIVE 100% EVERYTHING WORKS.

SOME SMALL DING'S OVER THE YEARS THIS
CAR WAS DRIVEN BY MY WIFE ON THE WEEKENDS.
FOR THE LAST 8 YEARS!  THE CAR WILL DRIVE ANYWHERE!!!!

0 RUST ANY WERE ON THE CAR NO FILLER!
ALL BODY PANELS ARE ORIGINAL TO THE CAR!

you could spend 10k for junk box then start restoring it.

LOW FEEDBACK BIDDERS IF YOUR SCORE IS LESS
THEN 25 YOU MUST CONFIRM YOURSELF BEFORE YOU BID!

AS IS SALE DEPOSIT IS DUE 24 HOURS AFTER SALE ENDS!
1000.00 NON REFUNDABLE MAKE SURE YOU WANT THIS ITEM
PLEASE BEFORE YOU BID.
BALANCE IS DUE 3 DAYS AFTER SALE ENDS BY BANK WIRE ONLY.
NO OTHER PAYMENT WILL BE ACCEPTED.

the car is located very close to   Philly pa.