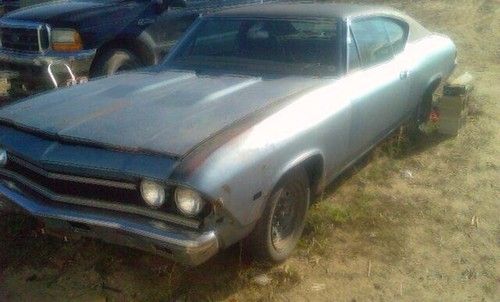 I have for sale a '68 Chevy Chevelle.

This is a project car, but is mechanically sound. It runs and drives, and is still a sharp car.

It has a 396 cubic inch big block, original numbers matching engine. The motor has under 1,000 miles on the fresh complete rebuild. It has an Edelbrock intake, and a 1,000 CFM Holley carbeurator. The motor as been balanced and blue printed, with hardened valves for unleaded gas. Spark plug wires are 9mm Accells, with wire looms. The motor runs excellent, and is unbelievably fast.

It is a 4 speed manual aluminum muncie transmission, with a brand new clutch. The trans also has a fresh rebuild, with less than 1,000 miles on it. It has a posi .411 rear end.

This car is not a numbers matching SS, but I have everything to make it an SS clone. It has the SS dash and steering wheel, and I have all the emblems to make it a clone car.

It needs paint, and the vinyl top is in rough shape. The car has very minimal rust on the body. The frame is painted, along with the engine compartment and firewall, so it is all very clean. There is no dings or dents, and has never had any panels replaced or body work done to it.

All the glass is good, except the windshield. The drivers and passenger side door windows are mint, along with the little windows behind them. The back window is also flawless. The windshield is cracked pretty good, and will need to be replaced.

The interior is perfect, aside from the front buckets having some rips, and the dash is cracked a little bit. The car will need carpet. The back seat is mint, and I have the door panels. Floor pans are very solid, along with the trunk.

This is a very sharp car, and only needs some minimal body work, paint, and the interior worked with. The motor and drive train are ready, and this car absolutlely rips.

Feel free to message me any questions you might have.