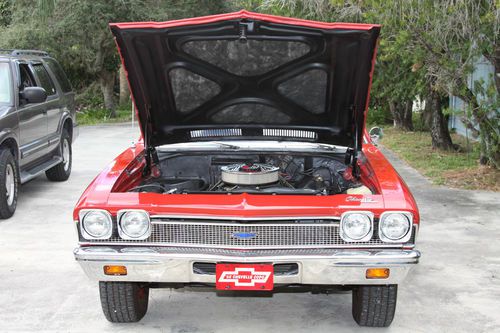 1968 Chevrolet Chevelle:  This Chevelle came from Virginia originally, I am the third owner. She is a well documented 32,157 mile only vehicle, with original interior, has new carpet. The guys in Moltier, Georgia took out rubber mat and replaced with new carpet, sprayed her with Madator Red polyurethane paint "beautiful job". Removed old 6cyl. auto trans replaced with 1980 (30) over 454 all balanced now a 461 c.i.d.ground bounder. 11:5 pistons ported and polished heads, correct Winter manifold with 850 dbl. pumper. They change 6cyl. steering column with correct 68, Muncie M-21 four speed numbers 3857584 GM & PO806 also 12 bolt posi rear end number 38757 45N. We replaced all shocks and springs, front and rear and rear sway bar with 69 SS suspension from Year One. Just replaced front brakes, cylinders, springs, shoes, these are Manual Drum Brakes. Been sitting in garage for over a year, my son and I crank her every couple months. Only driven to car shows but it's been awhile. Had apparised several years ago at Classic Car Coating at over $28,000, they were so surprised that there was NO RUST even in the trunk below the rear glass which is a common area.Very RARE to find onethis young to be so old. Reason for selling to further my kids education.