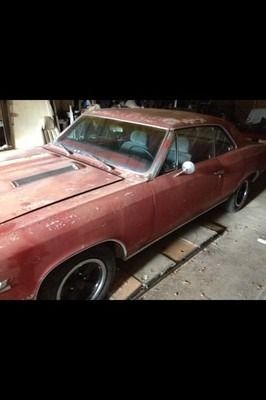 Condition: UsedA vehicle is considered used if it has been registered and issued a title. Used vehicles have had at least one previous owner. The condition of the exterior, interior and engine can vary depending on the vehicle's history. See the seller's listing for full details and description of any imperfections.Seller Notes:"NOT A MATCHING NUMBERS CAR!!! Originally had a 396 in it. LOW RESERVE....Needs interior, runs and drives. Does not have power steering, headliner is folded in the floorboard (was new but not installed) Trunk has new sheet metal...it was purchased from somebody that wanted to make it a race car. I didn't have the heart to see that done to it. Has the rally sport rims. A true SS...NOT A CLONE!! It has a 138 serial number. A good restorable car...has some rust on the body but it's sandable, nothing that isn't really repairable. Most all of the trim is with it minus a Chevelle emblem on the hood and trunk. Trunk has rust spots and honestly I would get an aftermarket one for that. Good start to a very nice classic American Muscle car. Rear window plate has some rust.Car is as valid as I know it to be....not hiding anything that I'm aware of and have taken as many pictures (12) as I can post for no fee. Car has a clear title....it DOES have a title. Good luck and good bidding!!!"

Needs interior, runs and drives. Has the rally sport rims. A true SS...NOT A CLONE!! It has a 138 serial number. A good restorable car that I currently need to sell. Some rust but nothing that isn't repairable. Good start to a very nice classic American Muscle car.

Shipping is ENTIRELY up to the buyer!! No scams HOPEFULLY.... I've been on here long enough that I know I'm not taking cashiers checks, visits to come get it late at night with fake cash and other scams.

Car is as valid as I know it to be....not hiding anything that I'm aware of and have taken as many pictures (12) as I can post for no fee. Car has a clear title....it DOES have a title.

Buyer will pay $500 NONREFUNDABLE deposit within 48 hours of purchase. Paid in full within 7 days. BUYER IS RESPONSIBLE FOR PICKUP!! ALSO, I have a For Sale sign on it here. If it sells before then I will cancel eBay posting.