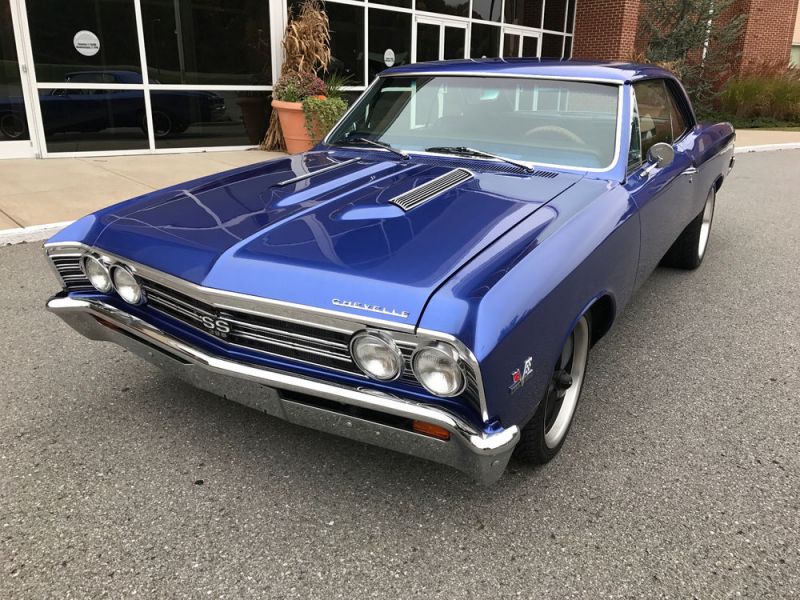 Feel free to ask me any questions about the car : jeanmariejhhoda@ukdancers.com .

Up for sale is a beautifully restored 1967 Chevelle Super Sport. This car is a true 138 vin. This car turns heads
whenever it is driven. I have only driven it to a couple local car shows and around town on nice days. The paint on
the car is House of Kolor - Lapis Blue. The body lines on the car are straight as an arrow. No rust or blemishes.
The doors shut great and the lines are beautiful. All the chrome pieces are new except the window moldings. It has
all new weather stripping as well. The wiring has been replaced with an American Auto Wire kit. The engine is non
numbers matching. It has a 402 with a mild cam. Has a very nice Edlebrock performer RPM intake topped by a Holley
750 double pumper. Has nice, long tube headers installed that I believe are Hedman brand. The exhaust runs to
middle of the car and is cut off. The engine was painted black and dressed in color matched to the car. This car
has power steering installed, however I have unhooked due to a noisy pump. Has a very nice Muncie M20 installed
also. The rear end is a 10 bolt, but will include a very nice 12 bolt posi with purchase. All new power disc brake
kit installed all around with new brake lines. Brand new Ridler wheels that are staggered 17x7 upfront and 17x9 in
the rear. The front of the car is lowered 2 inches and has a nice stance. The interior of the car looks amazing.
The seats where professionally recovered in black vinyl. Also a new headliner was installed. Has a brand new Ididit
tilt steering column added (still have original column and wheel if interested with purchase of car). Finishing off
the interior is a beautiful, wood-grain steering wheel. The gauges are all original however clock does not work. No
radio is installed. The floor in the car is solid with no weak spots or surface rust. The car is just as clean
underneath as what is seen on top. I have a lot of receipts I have kept over the process of this restoration.