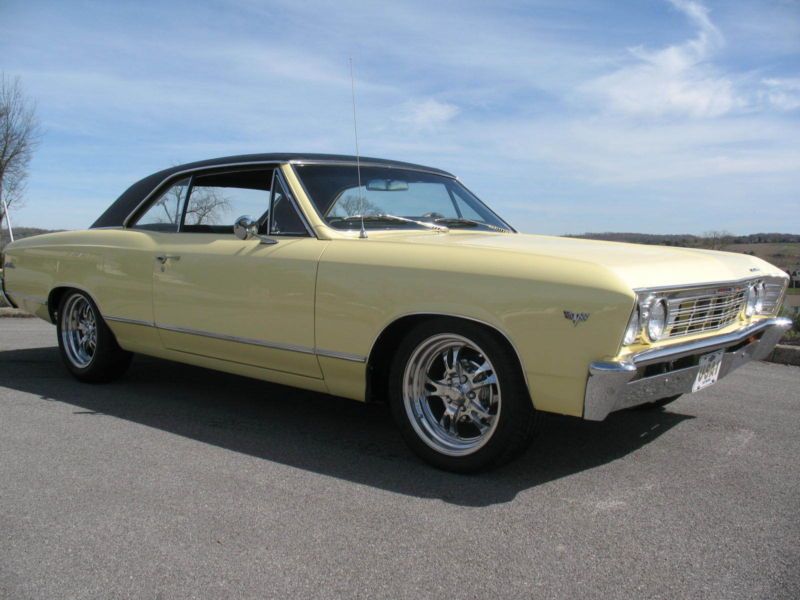 This beautiful Butternut Yellow 67 Malibu was a frame off restoration
by the previous owner. The frame is powder coated gloss black, the underside is LineXed and Advanced Plating
chromed much of the suspension and steering, including the rear end and drive shaft. This car is show quality
throughout but is not a trailer queen. He claimed he had logged 20,000 miles since the restoration was completed
and I have added another 500 or so.. The VIN starts 135177Z, which means it started life as a 6 cylinder Malibu
hardtop 67 built in the Fremont CA plant. It is now powered by a healthy 283 with 10.2 comp., 327 double hump
heads, 327/350 cam, chrome 69 Z28 intake and a Demon carb. It produces about 300 hp and sounds like a muscle car
should through the Flowmaster exhaust. It now sports a Turbo 350, 10 bolt with 3.42 gears,PS & PB. Over the winter
I added a Vintage Air Sure Fit kit with a chrome compressor & drier. The interior is a stock black deluxe bench
seat interior with a column shifter, SS gauges and a Grant classic wood wheel. A Pioneer tuner and disc changer are
mounted in the trunk and controlled by an infrared repeater remote.