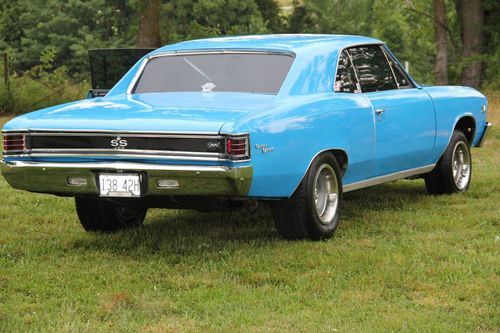 Condition: UsedA vehicle is considered used if it has been registered and issued a title. Used vehicles have had at least one previous owner. The condition of the exterior, interior and engine can vary depending on the vehicle's history. See the seller's listing for full details and description of any imperfections.Seller Notes:"Body looks great at a few feet away but could use paint at some future date. Thousands of dollars have been spent on the engine, suspension, and undercarriage."

The owner of this car unexpectedly passed away.  His widow is offering his pride and joy 1967 Chevelle SS Clone for sale.  What we know about the car is that is has a 350 ci engine with a Thumpr Roller cam; Dart Angle heads;

200 cc Intake Runner/64 cc combustion chamber; Scat Crank; 450 h.p........... 400 turbo Transmission w/shift kit; 3500 stall convertor;  410 posi rear gears.... Edlebrock rear suspension; Trailing Arms; Adjustable Upper Control Arms; New Front suspension; Front disc brakes; W/line lock; Flow master exhaust.   Several thousand dollars have been spent on the drivetrain and undercarriage of this car!  The motor starts easily, runs smooth, does NOT overheat and sounds great.  Just hearing it idle tells you this car will go.    The car has all of the SS 396 badging including the door panels.  It has new tires all around and rally wheels.  The interior looks good with matching blue piping matching the car on the buckets.
The body is more difficult to describe in that the paint is pretty good, no dents or dings in the car.  In checking as close as I am able it appears to have some body filler in the rear quarters.  The only rust or blemish I have found is on the drivers side lower rear quarter just behind the door  a 3" crack exist.  I don't know if this is rust or a crack in some body filler.  The only other negative I have noticed about the car is that it has a small transmission leak.
The widow wants to make sure the buyer knows all she knows or that I can find about the cars condition.  Anyone bidding is welcome to contact me through e-bay for any further information you would like to know or I would be happy to return a call to you to discuss the car.  We want you to know all we know about the car, which is primarily that this car is mechanically as good as you will find anywhere and the body is as described.  The reserve on this car is only slightly more than the costs of drivetrain components.