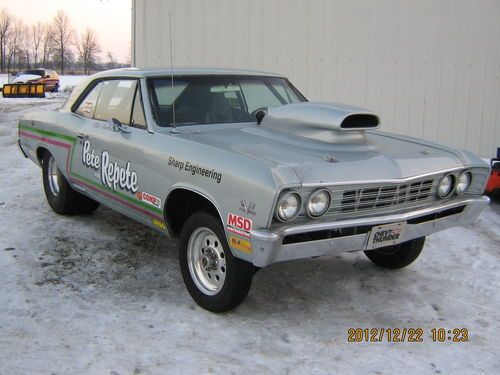 1967 Chevelle with a real radical 468 BBC, with a set of steel Merlin heads, Roller Rockers. I did take all of the decals off of the car. This is a legend car (Pete and Repete.)Turbo 400 B&M automatic transmission with reverse valve body. 9 inch ford, with 458 gears, strange spool and axles.This car will take a bigger tire , just to let you know. It has 14x32"s under it now.Car was Drag racing car for years, and I have put a ton of money in it to be put on the street.Car has an aftermarket dash, all auto meter gages, charging system, clean Ohio title, still has the vin tag on the car.Brand new Bumpers.Still has the delay box ,MSD electronics, roll cage, and working lights, 4-link car, all wheel disk brakes, I even have a perfect set of 1967 Ohio tags. I did put a few pics on here of the car with the decals, before I took them off.

I really dont know to much about the motor, other than what I did list on here. It has some serious power for sure. This is an all steel body car but the hood. This would make a real nice pro Street car, with a little tlc.
Please do not bid, if you have a zero feedback, cause I will block you from bidding.
I do have the right to end the action early, for I have it listed local also.
PS ---- I do have the molding for around the windshield, and the car has the original glass in it,and the windows will roll up and down.
I will try to answer any question that you have ,the best that I can. I also have another car on here as well Take a L@@K !!!