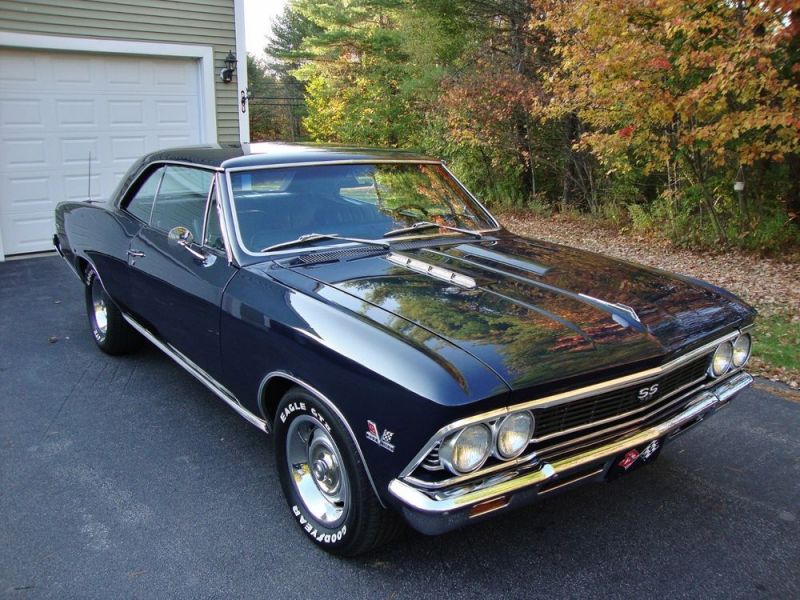 More infos regarding my car at: vincenzavkkhounborine@sennafans.com .

WOW look at this beautiful (138 code) 1966 Chevelle SS 396 with 4 Speed 12 Bolt Posy. The body is all original
body panels with only the right lower rear quarter being replace. The paint is in super nice condition being a dark
Midnight Blue metallic. The paint has a very high shine to it. All the glass is tinted and scratch free very nice.
Windshield is new replace a while back. All the emblems and trim are in super shape. Front and rear bumpers are
very nice chrome. The black interior is in excellent shape with no tears or rips. The options are AC/Heat up dated
stereo with remote with CD changer in trunk after market gauges and RPM tech. I was told from the previous owner I
got the car from that the 396 motor was the original motor before the rebuild. I know that that does not mean any
thing with out proof just want to mention it! Has a Serpentine Belt system on the motor. The motor has had a lot $
put into it runs the Balls. The Muncie 4 speed shifts like new. The rear end is a New 12 bolt posy with 31 spine HD
Axles and 3:42 gears. The front suspension has been all redone as has the rear suspension. All four wheels have
power Bare Disk brakes with drill Rotors on all four corners. Has front and rear sway bars. The 2 1/2 exhaust is
stainless with a X pipe. The Ultima battery has been move the the trunk compartment. This car has been storage and
use very little by the other owner for he was always traveling for his job and that is why he decided to sell it. I
have like 8 pages of what went into the car.