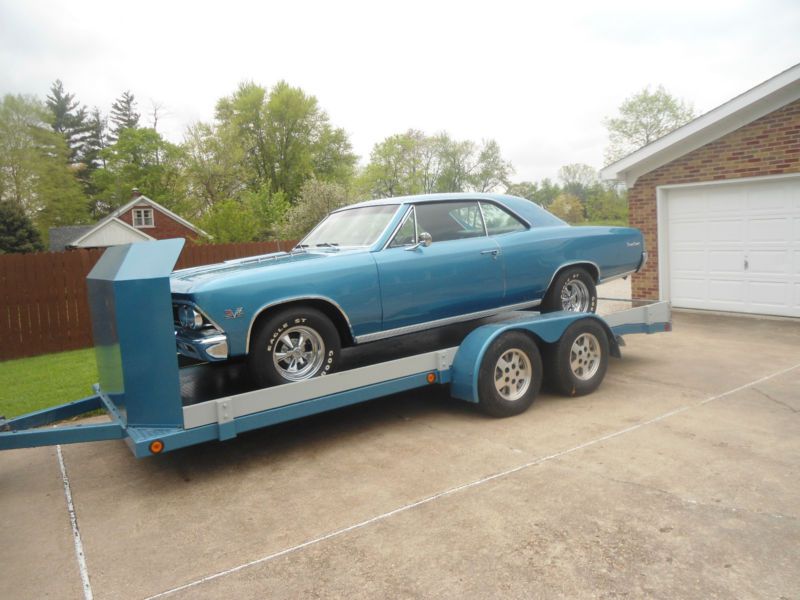 1966 Chevelle SS and 1995 Car Trailer
VIN# 138176A140470
Marina Blue Exterior and Black Interior
Mileage:
396/325HP Engine
4 Speed M22 Rock Crusher Transmissions with Original T Handle Shifter
Original 12 Bolt Rear End
Deep Dish Cragar Wheels with Knock offs on P225/20R14 Goodyear Tires
A complete Frame off Restoration was started in 1990 and has only 4723 Miles since it was finished in 1995 and
still looks as good as it did when finished. This car is rust free and has all chrome inside and out either
re-chromed or replaced. Interior has original console, Strato Bucket Seats, Knee knocker Tach, all restored to
original condition.
The Chassis has all new coil springs, bushings, shocks, upper and lower ball joints, tie rod ends. All brake
components are new with added brake booster; the underneath looks as good as it does on top.
The Engine is a 396/325 HP and has been totally rebuilt. Has all new components, belts and hoses, and complete
Power steering set up.
The Car Trailer:
This is a 1995 all steel double axle car trailer and includes an Air Dam, brakes on both torque flex axles,
Breakaway safety system on 15/16 inch all hitch. Removable 6inch sides for different applications.
Asking $38,000 for both the car and trailer.