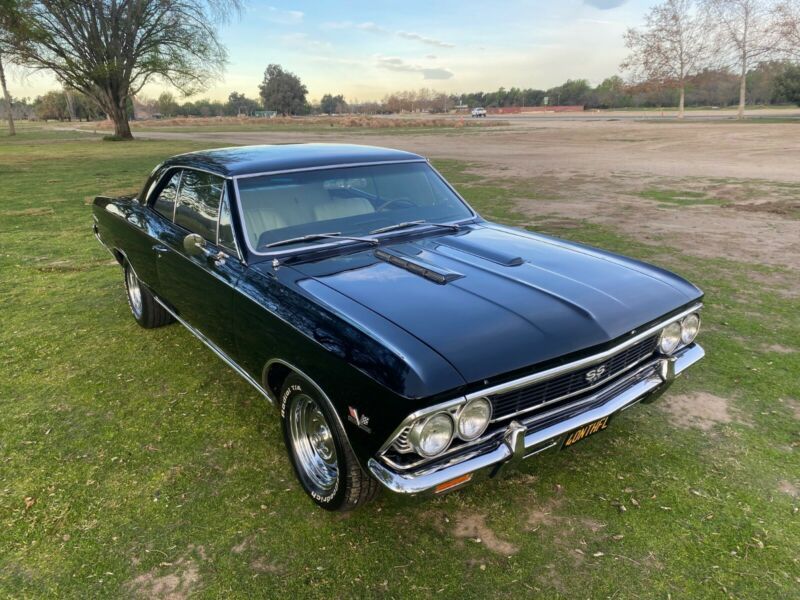 This is a true numbers matching 138 Vin code SS. There is 6,448 miles on the odometer with the original
396 ci rebuilt motor, backed up by the original 4 speed manual transmission. It has a Holly carburetor that looks
to be a 650 and an Edelbrock high rise manifold. Upgraded with a race cam not sure of the brand but it sounds and
performs amazing. It has the original cast iron GM headers connected to a wicked Flowmaster exhaust system. It
sounds great with a nice lobe and throaty sound. She has been upgraded with electronic ignition.
It has front disc brakes with drilled rotors and newer BF Goodrich TA/Radial tires. It has the original factory air
conditioning that blows cold. The heat blows hot. All gauges on the car work. Gas, Oil, Water Temp, battery and
even the clock works! Everything works, the cigarette lighter, windshield wipers, all lighting including the dome
light and high beams. The ash trays, front and back have never been used. It has the original AM/FM radio that
works perfectly. The car has been well maintained and just had all of the seals in the transmission replaced by Box
and Gear. The transmission was inspected and is in excellent condition. It runs strong, handles like she was new
and shifts gears seamlessly. There is zero hesitation when you start her up. The battery is less than a year old.
No leaks.
The exterior has a newer beautiful black paint job. Recently detailed and has a good Teflon coating on the paint.
It has the original beautiful Rally Wheels that were completely re chromed. This car is Rust Free on the floor
pans, trunk pan, rockers and engine compartment. All windows are lightly tinted. A newer white interior that is in
absolutely beautiful condition. The headliner is also white and in perfect condition. The black carpeting is in very good condition as well.