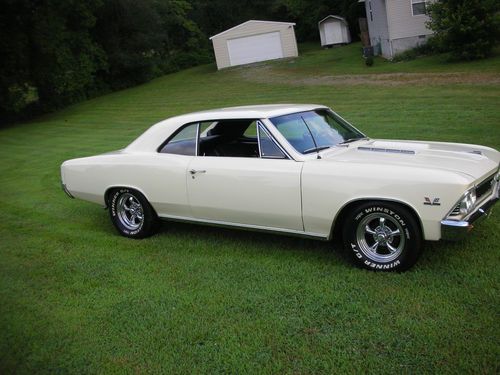 FOR SALE  IS MY 1966 CHEVELLE SS CLONE.HAS A NICE RUNNING 350 WITH 350 TURBO TRANNY.THIS CAR HAS POWER STEERING MANAUL BRAKES,NICE EXHAUST SYSTEM SOUNDS GREAT RUNS AND DRIVES GREAT.PAINT AND INTERIOR ARE VERY NICE HAS NICE AFTERMARKET PIONEER CD PLAYER.UNDERNEATH THIS CAR LOOKS GREAT ROCK SOLID NEW BUMPERS AND OTHER CHROME ALL GLASS IS GOOD LOVE TO TRADE BE REAL THANKS, THIS IS REAL NICE CAR A PERSON CAN GET IN AND ENJOY NOW,BE PROUD TO TAKE TO ANY CAR SHOW IT PRESENTS ITSELF WELL LOOKS GREAT IN PERSON .

BUYER IS RESPONSIBLE FOR PICK UP CAN DRIVE THIS CAR HOME

PLEASE DONT BID UNLESS YOU PLAN ON FOLLOWING THROUGH WITH SALE

I REQUIRE 1000 DEPOSIT WITHIN 24 HOURS OF AUCTIONS END

THANKS AND GOOD LUCK BIDDING