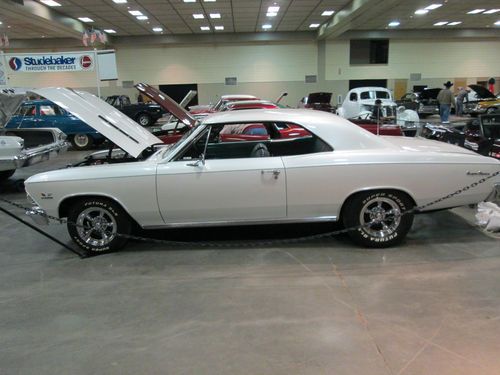 This is a very fast car.  I purchased it 6 years ago and have been working on it ever since.  It has a 454 that was built by a speed shop in Denver and was dynoed at over 450 hp.  I added a new high amp chrome alternator, high rpm mini starter, new Holley street avenger carburetor and a new Holley fuel pump.  I have info on motor settings when was setup.  It was set up for mile high so had to change some setting.  It has an MSD ignition with rev limiter.   The radiator is cooled with help from a large fan that can be manually adjusted, it also has a transmission cooler.  The transmission is a fresh 350 turbo with a shift kit. The shifter is a B&M mega shifter.  The car was completely done from the ground up but the body was not removed. It has new springs, shocks, front disc brakes and new shoes on back.  The rear end is a 12 bolt positrac with 3.73 gear ratio.  The exhaust is new with cross over pipe and turbo mufflers.  When it starts everyone spots to look.  The cam makes it sound nasty, which it is.  I bought all chrome American Racing wheels so they would stay looking new.  I did not go with the larger sizes stayed with 8" in the front and 9" on the rear 15".  It has larger tires on the back that gives it the right stance. I also put air shocks on the back.  The wheels had to made with an offset to clear wheel well in rear.  The only thing I haven't changed are the bumpers.  They are pretty god but new or re-chromed would be better. The Interior is all new original two tone aqua bench seat, you don't see very many with a bench seat.   The head liner is new and carpet.   All of the dash is new and the dash pad is changed to match the color of the seats.  I had a radio shop put a pioneer radio and cd in the glove box, it has remote control.  The original radio still works.  I suppose I have left out some of the changes please call me or email at reder@bbc.net or call 308-763-1418 if you have questions.