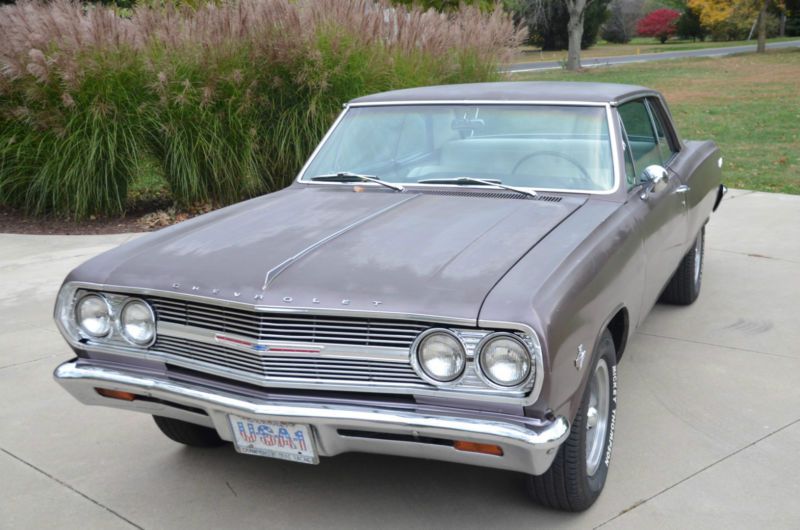 If you have questions email email me at: pansypsschuchmann@pi8.com .

1965 Chevelle Malibu SS. A rare and unmolested original 138 code Muscle Car. Rebuilt Original 327/250hp engine is
all stock with exception of period correct Edelbrock C3B aluminum intake, Quickfuel 650 Carb., Pertronix
"Flamethrower" Distributor and coil.
PS and PB, all new brakes and completely new front suspension including springs, ball joints and under hood
components. Cold Factory A/C with new evaporator, condenser, drier and lines. All new under dash or restored
original ductwork, cables and heater core. Original factory gauges all work perfectly (except the clock).
Rebuilt 350 Turbo trans with shift kit. Original Powerglide is included. 12 bolt rear. Flow master duals with new
down pipes sound amazing.
All rust free original sheet metal including floors and trunk with the exception of a patch panel above the left
rear wheel and the entire left rear quarter was painted to match the brown (as best we could). Frame is original
and spotless.
Originally Evening Orchid - a 65 only color now a ruddy brown with patina. Original white interior partially
restored. Some stained carpet and a few stains on the headliner. Pioneer super tuner with new speakers sounds
great.
New MT Sportsman Radials with vintage1965 Torquethrust Mags. A nice set of original 65 SS hubcaps are included.
Nice, original chrome and stainless. One small dent in the rear bumper.
Runs and drives new. Everything works. Suspension and everything under the hood is done. Just needs paint and some
interior work to be a $45,000 car. Drive as is and make cherry later!