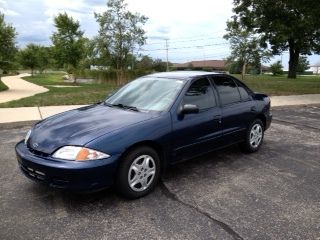 I have for sale a 2000 Chevy Cavalier. This is one of the Bi-Fuel cars that runs gasoline or CNG(compressed Natural Gas). Car runs well on either fuel. Tires are 70%, has had thermostat replaced, battery, brakes, and wheel bearings. Also, I had the windows tinted and installed a bluetooth capable CD player installed. This car gets between 25-30MPG, and CNG runs usually between $1.50-$2.20/gallon depending on where you live in the country. The interior of the car is in very good shape inside, and shows some wear on the outside. This car has defiantly paid for itself many times over in fuel savings, and the only reason I am selling it is because I want to purchase a larger vehicle that runs on CNG to be able to haul more. If you have any questions, please feel free to email, or to text Justin at 616-299-1812, thank you!