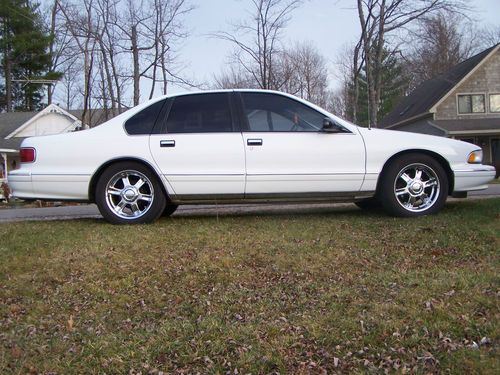 Condition: Used: A vehicle is considered used if it has been registered and issued a title. Used vehicles have had at least one previous owner. The condition of the exterior, interior and engine can vary depending on the vehicle's history. See the seller's listing for full details and description of any imperfections. ...
I BOUGHT THIS 1995 CAPRICE FROM A LITTLE OLD LADY IN ARIZONA  A NUMBER OF YEARS AGO.
I HAVE ADDED A SONY CD PLAYER, TINTED THE WINDOWS, PAINTED THE PILLARS, INSTALLED AN IMPALA SS GRILL, CHROME RIMS AND Z-RATED TIRES.
JUST PUT NEW TIRES ON THE FRONT LAST WEEK.

NEVER, EVER BEEN DRIVEN IN THE WINTER OR SEEN SALT SO THERE IS NO RUST WHATSOEVER.

**THE ONLY ISSUE WITH THIS CAR IS THAT THE DIGITAL DASH COMES AND GOES - I JUST USE MY GPS TO KNOW MPH.