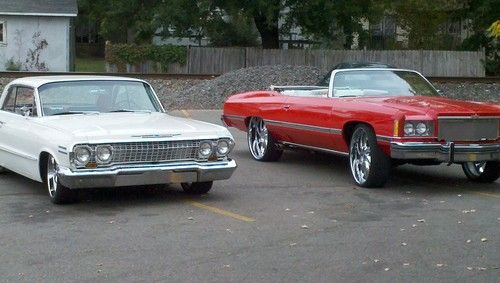 FOR SALE TODAY IS A 1974 CHEVY CAPRICE CONVERTIBLE...THE CAR IS A CREAM PUFF...THIS BEING ALMOST 40 YEARS OLD AND ITS 69K ORIGINAL AND DOCUMENTED MILES ARE HARD TO COME BY. THIS ELDERLY OWNED CAR HAS BEEN BABIED ALL THSES YEARS AND IT SHOWS...THIS AINT YOUR $10,000 CAPRICE . THAT BEING SAID HERES YOUR CHANCE TO BE AN OWNER OF THIS BEAUTIFUL CAR. HERE RECENTLY THE CAR HAS HAD A FEW UPDATES. WE ADDED A SET OF WHEELS THAT ARE CUSTOM MADE.TOOK 6 WEEKS TO FINALLY GET.THE 26 INCH FORGIATO AZIONI'S($8500) GIVE IT A STANCE THAT IS APPEALING AND VERY NICE. I WENT AHEAD AND PUT A BRAND NEW FLOWMASTER SUPER 44 DUAL MUFFLER SYSTEM RUNNING OFF A SET OF BRAND NEW HOOKER HEADERS ON IT AND IT SOUNDS AMAZING ...WE WANTED TO PEP UP THE 350 ENGINE AND SHOW IT OFF WHEN YOU POP THE HOOD SO WE DID AN ELDEBROCK ALUMINUM INTAKE AND CARBURETOR. THEN WE ADDED THE PAINT AND CAR MATCHING CHOME CHEVY VALVE COVERS.THIS CAR IS SHOW READY...THE INTERIOR IS STILL WHITE LIKE FROM THE FACTORY NOT YOUR WHITE THAT TURNS YELLOWISH LIKE YOU SEE ON EVERYONE ELSES.THE DASH NOT A CRACK IN IT.THE CONVERTIBLE IS NICE AND WORKS LIKE IT SHOULD.I DO HAVE THE ORIGINAL RIMS AND HUBCAPS AND HAVE A SET OF CHROME WHEELS FOR IT.SO 3 TOTAL SET OF RIMS. ALSO HAVE THE SKIRTS CANT FORGET THOSE!

ANYHOW THE CAR SPEAKS FOR ITSELF!.THIS IS AN ALL ORIGINAL CAPRICE BESIDES THE SET OF FORGIATOS AND A FEW ENGINE UPGRADES BUT I DO HAVE ALL ORIGINAL PARTS. I WANTED A DROP TOP CAPRICE FOR YEARS AND I LOOKED AT A  COUPLE HANDFULS AND NEVER FOUND ONE I LIKED WITHOUT PUTTING 20 TO 30K INTO IT TO BE PRESENTABLE. IM NOT GONNA GIVE THE CAR AWAY. IM OPEN TO SOME TRADES BUT THEY GOT TO BE NICE. I TRIED TO DESCRIBE THE CAR AS BEST AS I COULD SO I DONT GET THOSE ANNOYING PHONE CALLS TO ASK DUMB QUESTIONS,...BUT I KNOW THERE WILL BE SOME QUESTIONS IF SO FEEL FREE TO GIVE ME A SHOUT ON 574-377-3468.