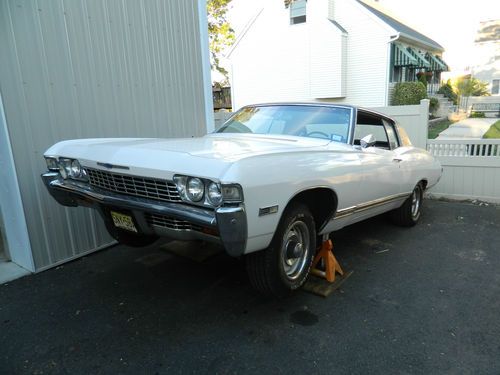 This car did get salt water from Hurricane Sandy. The water only came as high as the transmission hump.
The fuse box and radio under the dash still work, so they did not get wet. The car was originally a 327/TH400 but now has a 350/700R4. I have the original drivetrain, but it may have some water damage. The car has a power front disc conversion with all new suspension front and rear. New tires on rallye rims 15x7 & 15x8. I also have a 3.55 disc brake rear to go in the car with the proper master cylinder. New carb, water and power steering pumps, on a serpentine belt setup.  The car has headers and a Pypes dual exhaust with an x pipe. The motor spins freely, but I have to try and replace the starter to see if it will run. The trans lost 3rd and 4th gears before the storm so that will have to be rebuilt. The body is a 20 footer, with some rust starting in the quarters and lower fenders. The trunk pan has a hole that was patched. The frame is very solid, as is the underside. All you probably need to do is fix the trans and replace the rugs ( or just clean them) and you should be on your way. I have too many projects and too little time so this one needs to go. The title may reflect flood damage, as there was an insurance claim on the car. I can deliver within 50 miles of 07737 for free, any further we can talk.
NO LOWBALL OFFERS !
Any questions contact me at Patsgarage75@aol.com
Thank you for looking !