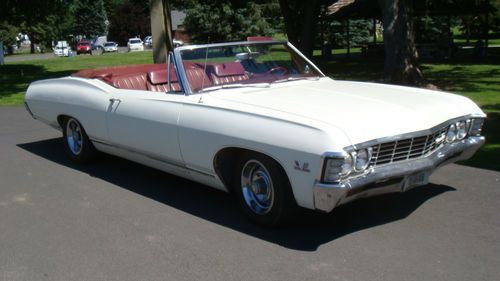 Offered for sale is a very rare 1967 Caprice convertible. Absolutely unmolested, unrestored and ready to be driven to shows and meets. The 427 engine growls as it should and the Caprice runs flawlessly. The three-speed turbo-hydramatic transmission shifts fine. The car has just over 90,000 original miles and has recently come out of an estate owned by a serious Chevrolet collector. This powerful car spent most of its life in Kalispell, Montana. Engine code "IJ" is correct for the car. Has lots of options: air conditioning (all the parts are there but it is not hooked up), power windows, power top, factory AM/FM radio, and tilt column.  The radio actually plays but faintly--I would guess a new speaker.The ragtop looks good from twenty feet..closer inspection reveals a few minor items which need to be dealt with if someone planned to show the car. A couple of seams in the front bench seat have separated, there are a couple of small cracks in the padded dash, the windshield has one small rock pit but it is in line with the mirror and out of driver's field of vision. The body could also use a little TLC..a couple of places where rust is showing, a small crease in the LH fender, deck lid shows repaint over a previous repair on the lid's upper surface. Although the car can be driven and enjoyed with pride just like it is, the poor repaint does little justice to this highly collectable car. A paint job would improve things a lot. The ride is smooth but a new set of narrow whites would be a fine complement to the correct factory rally wheels. More photos available upon request. Car is advertised locally.

A final note: The top mechanism works as it should and the black paint on the rails still has its gloss. The top? Well, it would keep out the rain but the seam below the glass back window is coming loose. If you plan on driving this in Seattle in March, buy a new top (I don't know who would do a damned fool thing like that anyway?). Other minor issue---arm rest pads could be replaced as well as the front kick panels. Nothing serious--just cosmetic flaws. The door trim panels are good and solid but there are small spots on the upper vinyl which could either be touched up or not...as the full description states, this big block Chevrolet is an UNRESTORED classic. With the low reserve price I have set, there is lots of money left over to dress this convertible out and still own a true classic on the cheap. If it doesn't sell, I'll drive the beast all summer and garage it this winter...and make small cosmetic improvements as time goes by.

Okay...Thanks to some sharp eyed Ebayers, I have done more checking myself and it seems that this car which I bought out of an estate, is not quite what the Montana title says it is: a Caprice convertible. This car started out its life as a two door hardtop! Whenever the conversion was done, it was done very, very well. I have been around collector Chevrolets most of my life and I was still certtain that a mistake had been in the VIN somewhere..until I crawled underneath the car. Yep...hardtop frame. Thusly I am making the first bidder an opportunity ti withdraw his bid and we will start this over again. Sorry...I guess you can never completely trust a title.