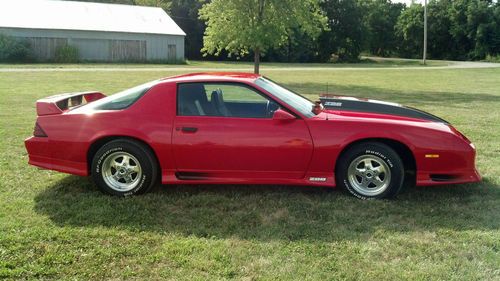 Condition: UsedA vehicle is considered used if it has been registered and issued a title. Used vehicles have had at least one previous owner. The condition of the exterior, interior and engine can vary depending on the vehicle's history. See the seller's listing for full details and description of any imperfections.Seller Notes:"Vehicle is in great condition it has a couple of very small chips that have been touched up, but nothing major, speedometer, and horn doesn't work."

Up for auction is a fully restored 1984 Z28 Camaro, I have owned this vehicle for 16 years it was my first car in high school. The vehicle was professionally painted 3 years ago and is flame red with charcoal racing stripes. It has a 4 inch steel functional hood, 1991 Z28 Camaro ground effects, Z28 Spoiler and bumpers.The wheels are 15 inch Summit knock off's of Weld Pro stars. The Tires are BF Goodrich. It has a crate 350 engine with 8000 miles (always had fresh oil changes), Torker two intake, Edelbrock 650 carburetor, aftermarket HEI Distributor, aluminium pulley's, mild Cam and 202 ported and polished double hump heads. The Heads have about 10 miles on them. It has Shorty Headers and hooker Aero Chamber 3 inch exhaust. The transmission is a TH350 with a 2500-3000 stall converter, and a B&M shift kit. It has a Custom built drive shaft. The interior is black and gray with a Pilot Steering wheel (Same as Grant GT) it has a CD Player, but you cant really hear it over the exhaust.It has a B&M Shifter made for a camaro. No cracks in the dash or in the arm rest (which is very common for Camaro's) Interior is in really good condition.

Shipping and Payment....Please only serious bidders I require $1,000.00 down with in 48 hours at end of Auction. (None Refundable to cover my time and ebay cost if any one backs out) LOCAL PICK UP ONLY!!!
Vehicle is as is due to you never know when a Hot Rod will break....
Happy bidding, and to the winning bidder hope you enjoy this car as much as I have.