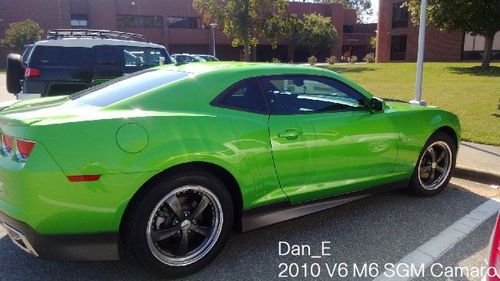 Condition: UsedA vehicle is considered used if it has been registered and issued a title. Used vehicles have had at least one previous owner. The condition of the exterior, interior and engine can vary depending on the vehicle's history. See the seller's listing for full details and description of any imperfections.Seller Notes:"SGM is a low-production Camaro in this configuration for MY10. There were only 456 Camaro Synergy Edition V6 M6. This will become a very rare combination for the 1st year rerelease and it is owned by the orginal owner, a US Guard Guard member who stored it while away at sea for multiple tours."

Custom-ordered 2010 Camaro Synergy Special Edition with 20,500 miles. Non-modified 304-horsepower 1LT, 3.6-liter, direct-injection V6 motor with M6 transmisssion. Includes factory installed striping and spoiler, and factory ordered and dealer installed ground effects. Also factory equipped with a sunroof and the Camaro Convenience and Connectivity Package, which add Bluetooth, USB port and remote vehicle. It shipped with factory 19" wheels (not included), aftermarket TSW wheels added by owner, and dealer-installed Chevrolet Cat-back exhaust (original 6-miles old exhaust available for cost of shipping from TX only). Includes Synergy Green instrument panel, door inserts and stitching. Comes complete with unmolested window decal and uninstalled original dealer badging. SGM is a low-production Camaro in this configuration for MY10. There were only 456 Camaro Synergy Edition V6 M6. This will become a very rare combination for the 1st year rerelease and it is owned by the orginal owner, a US Guard Guard member who stored it while away at sea for multiple tours. Available now in Newport News, Virgnia