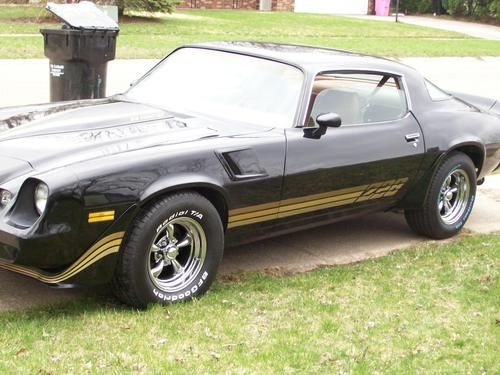 Listing is for a Very Nice 1980  Z28 Camaro,black and a 4 speed. Less than 100 miles ago,installed was a NEW "Professional" built 406 engine with 500+ hp,supposed to be closer to 570 mark,also i just installed BRAND NEW American Racing CHROME wheels all the way around,with BRAND NEW tires. This is an original car that never had any rust ever,the underside is extremely clean,as is the trunk and floors,always garage kept and not winter driven. This car,aside from the motor,looks 100% stock (i do have the EXCELLENT  original wheels),there are no clues,other than the awesome engine sound ,of what lies beneath. I am 46 years old and do not hot rod my cars,just feel that something that looks this good,should also go. I have not beefed up the 3:42 posi rear end,and the trans is a built super t-10 4 speed. The glass in this car is excellent,scratch and chip free,the power windows work,original radio works,all gauges (except clock) work. This car drives straight as an arrow,even at 70 mph,and is a serious attention getter. NO RESERVE,the negatives of this car are,power locks don't work,fuse? i havent' even checked,there are also a few paint small small chips (i will have taken care of),could probably use stiffer front springs with the bigger tires,thats about it. The air induction flaps work as they should,kinda neat. The engine does have aluminum heads,that have been ported and polished,and this car can sit at idle and never even get close to overheating. This is for sale locally,so call with realistic offers 269-876-2853 The original spare,and inflator are in the excellent cond trunk,and this car is a repaint that shines very nice. Thanks for looking!