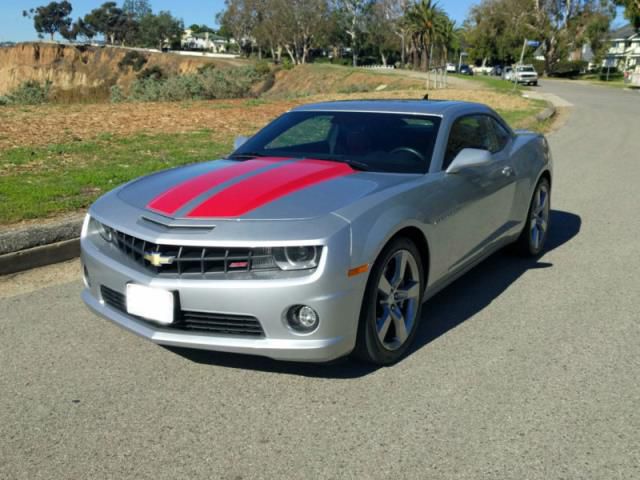 A few details on this well maintained 2010 Chevy Camaro SS2 6.2L V-8 This is a ONE-owner car that was dealer maintained !!!!!!2010 CHEVROLET CAMARO 2SS!!!!! !!!!!!AMAZING COLOR COMBO!!!!! !!!!!!!DUAL HEATED SEATS!!!!! !!!!!!!BREMBO RACING CALIPERS!!!!!! !!!!!!BOSTON PREMIUM AUDIO SOUND!!!!!! !!!!!! PARKTRONIC!!!!!! !!!!!! XENON HEADLIGHTS AND FOG LIGHTS!!!!! !!!!!!!SILVER with ORANGE STRIPS!!!!!! !!!!!!!BLACK with RED INSERTS!!!!!! !!!!!! ONSTAR SYSTEM!!!!!! !!!!!!POWER SUNROOF!!!!! THIS STUNNING IS A ONE OF A KIND 2010 CHEVROLET CAMARO 2SS 2DR COUPE! THIS GORGEOUS VEHICLE FEATURES SILVER COLOR EXTERIOR ON BLACK LEATHER INTERIOR! WITH 62K ORIGINAL MILES IT LOOKS VERY CLEAN INSIDE AND OUT. IT COMES FULLY LOADED WITH OPTIONS SUCH AS POWER WINDOWS AND LOCKS, POWER MIRRORS, DUAL FRONT CURTAIN AND SIDE AIRBAGS, BOSTON PREMIUM AUDIO, PARKTRONIC, XENON HEADLIGHTS AND FOG LIGHTS, ONSTAR SYSTEM, DUAL HEATED SEATS, POWER SUNROOF, SPORT STEERING WHEEL WITH CONTROLS AND MANY MORE(SEE THE PICTURES FOR MORE DETAILS)! ALL THE OPTIONS FUNCTION ACCORDINGLY! THE POWERFUL 8 CYCLES 6.2L ENGINE RUNS LIKE NEW AND THE 6 SPEED MANUAL TRANSMISSION SHIFTS SMOOTHLY INTO GEARS AND PROVIDES A LOT OF POWER! THE SILVER COLOR EXTERIOR SHINES BRIGHT LIKE NEW, AND THE BLACK LEATHER INTERIOR HAS BEEN KEPT VERY CLEAN! THE OVERALL CONDITION OF THIS CAMARO IS VERY GOOD, AND IT IS PRICED TO SELL VERY QUICK .