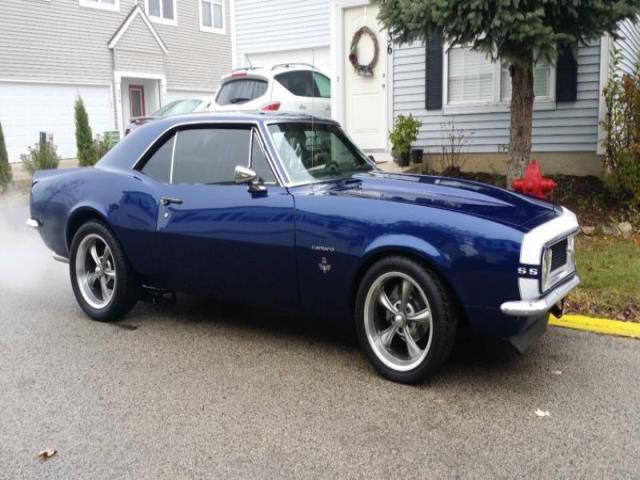 eMail me for more details : rustyk34weinberg@mail.com

1967 CAMARO SS V8 AUTOMATIC NO RESERVE SHARP 1967 CAMARO WITH LOTS OF NEW PARTS IT IS A TRUE DAILY DRIVER ENGINE: 350 CHEVY ENGINE WITH MILD CAM PUSH BY 350 TH TRANSMISSION. 750 HOLLY CARB DP. NEW VALVE COVERS ALTERNATOR, HEADERS WITH NEWER FLOWMSTER EXHAUST. ALL GAUGES WORK. HEATER, HORN, WIPERS, IT HAS AFTERMARKET STEREO WITH CONNECTION FOR YOUR CELL PHONE OR IPOD, WITH TUB BAZOOKA AND A BAZOOKA AMPLIFIRE, 3 WAY SPEAKERS. ALL BRAKE LINES AND RUBBER LINES WERE REPLACED, ALL NEW SHOES NEW SLOTTER DISC BRAKES AT FRONT AND DRUMS IN BACK. NEW 17 RIDLER WHEELS WITH NEW TIRES 245/40/17 FRONT 275/40/17 IN BACK LESS THAN 200 MILES ON THEM NEW BUSHINGS, ALL NEW UPPER AND LOWER BALL JOINS, SWAY BAR LINKS, LOWERED AT FRONT 2 INCH IN BACK 3 INCH, REAR AIR SHOCKS. THE BODY IS PRETTY STRAIGHT HAS NEWER PAINT JOB WITH NEW QUARTER SKINS BY PREVIOUS OWNER FOR WHAT I KNOW, FRAME RAILS ARE SUPER SOLID WITH ORIGINAL WELDS ALL SOLID FLOORS !!!!!!!! INTERIOR IS VERY DECENT ALL SEATS ARE IN GOOD CONDITION NO RIPS, HEADLINER SEEMS TO BE NEWER, NICE DOOR PANELS, HAS A CENTER CONSOLE WITH B&M SHIFTER, CAR USED TO BE STICK SHIFT BEFORE, SOMEWHERE ALONG THEY SWAPED THE TRANS TO AUTOMATIC BUT THE PEDAL AND ALL LINKAGE ARE STILL THERE. THIS CAMARO IS NICE AND READY TO DRIVE ANYWHERE, ITS HAS AN AGGRESIVE STANCE THAT WILL EARN A LOT OF COMPLIMENTS.