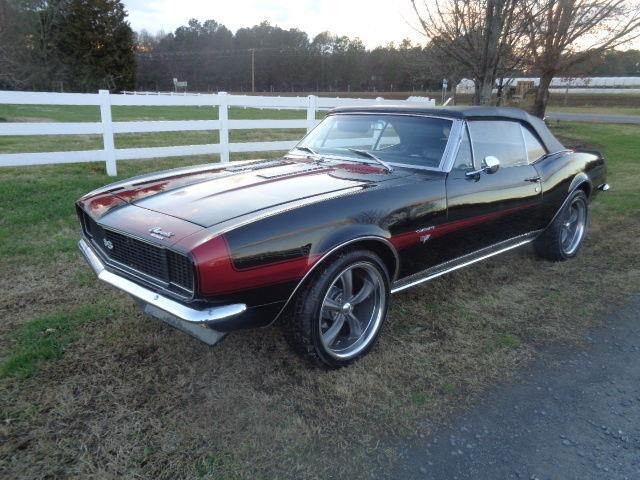 this beautiful rs /ss convertible Camaro with a 1-1/2 yr old professional restoration with a stunning mirror black paint job with custom candy red stripes depicting all of chevys awesome stripe designs combined into one for a sleek and sexy look all under 5 coats of SIKKENS clearcoat that has been sanded to perfection and polished to a mirror shine and it looks a mile deep. it has a non matching number 350 small block bored .30 over with 4bolt mains flat top pistons high volume oil pump pro angle plug aluminum heads with 205 cc intake runners and 64 cc chambers a 298* duration hydraulic cam with roller rockers aluminum valve covers by mickey Thompson edelbrock performer rpm intake 750 edelbrock carb topped of with an edelbrock finned aluminum air cleaner with a k&n high flow filter stainless steel headers new 2.5 inch dual exhaust with x pipe and flowmaster mufflers and tailpipes that turn down behind the rear wheels five speed borg warner trans with new 11 clutch and steel scattershield all connected up with a new driveshaft feeding power to a new 8.5 10 bolt rear with 3.73 gears and a new moroso brute strength posi unit and a bright chrome cover she really screams and with the overdrive trans it will get to 125 in no time and keep the revs low for that highway cruising and with all that speed comes better brakes the front disks have been rebuilt with high carbon metallic pads and an all gm12 rear disk conversion that uses all gm parts as well ,and a parking brake that actually works besides brakes, better handling is added by the way of a larger than stock front sway bar and a gm rear sway bar custom designed for these cars all works very well with the new 18 boss wheels with new tires for a great ride and awesome handling . on to the interior it has been restored with all new seat upholstery and foam and it has the super rare fold down rear seat option with some handy 6x9 speakers mounted behind the seat for more sound as well as dual 4 speakers in the dash powered by a custom autosound radio with aux hookup for I pod or mp3 devices the carpet is new as well and the original console has been nicely restored and the shifter has been modified with a new hurst stick and 5 speed ball that looks almost original I have added some large triple gauges and a nice autometer tach that can be easily removed if not to your liking the dash is very clean and has a new housing and lens and all the gauges and lights function. steering wheel is new billet aluminum with working horns new glove box liner . the heater controls all work well as a new heater core and blower was installed upon resto the door panels and rear trims are all new as well as the convertible top and all the chromes around the windshield as well as the windshield itself it is a manual top but folds up and down with ease for those times when you just want to put the top down and cruise the rally sport options on these cars is denoted with hideaway headlights and relocated marker lights front and rear as well as chrome trim on the lower of the doors this is an ORIGINAL rs car and all the chromes have been replaced as well as the marker lights front and rear and the taillights and bezels anew as well the headlights have also been rebuild with all new relays and motors and switches . further details on the body include new sheet metal throughout and very little body filler was used to make this car laser straight.with perfect gaps this car will not disappoint put the top down and go for a cruise ANYWHERE I hope someone else can enjoy it as much as I have
For further questions email me : pr395orenperez@tightmail.com