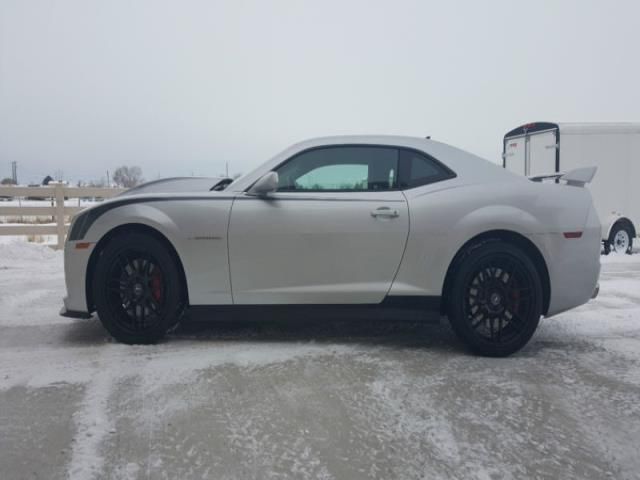 eMail me for more details : dennieandersonk0h@mynet.com

Up for sale is what originally started as a bone stock 2010 Camaro SS. It has since been built with only high quality parts from reputable automotive performance shops and is ready for a new owner to enjoy. If you have any specific questions or want any specific pictures taken please don't hesitate to ask. Between the pictures and videos you should have a really good idea of what you are looking at. Car was fully tuned by premier performance in West Jordan, Utah and doesn't skip a beat. Car is an absolute beast of a machine. You can easily add more boost if you wish but as it sits right now it's perfect in my opinion. I didn't see the point or the need with adding more power to a proven & reliable 10 second street car. A few mods include: Whipple 2.9 Supercharger with Heavy Duty Jack Shaft set @ 9psiA set of GM Performance CNC’d, polished and ported heads. LS9 head gaskets and ARP head bolts. Innovators West 8-Rib Drive w/ 8” damper and crank bolt. Innovators West 8-rib GM Alternator Pulley, 8-Rib Smooth Idler pulley, 8-rib Tensioner Pulley, 8-rib Camaro P/S pulleyHolley Valve Covers really cleaned up the engine compartmentComp Cams GM – LSr Series LSA Grind blower cam HR 0.624/0.624 239/243 114 LSANew sprocket tensioner and bolts along with new Trunion upgrade, dual valve springs, new pushrods and valves. GM ZL1 Dual fuel pump, BAP, Injector Dynamics IDE850 injectorsPolished and ported VMAX throttle body. Elite engineering catch can. Katech C5R timing chain, Trend tensioner, and Melling Oil pump. Pfadt solid engine mounts replaced the stock mounts. The engine had the L99 to LS3 Conversion done with new valley tray, DOD and AFM delete as well as removing the VVT cam and went to a 3 bolt cam. Roto-Fab Cold air intake along with the blower upgrade for use with the Whipple. SLP Long tube ceramic coated headers 1 ¾” into 3” collectors. No Cats installed. If you have emissions let me know and i'll have some cats welded on before it leaves. PowerFLo X-pipe and PowerFlo 3” pipe all the way back to the PowerFlo Methanol kit was installed and replaced the washer reservoir with Methanol. The kit works off of the MAF sensor and lasts a long time since it's more of a precaution than a necessity. Yank SC3000 torque converter. You can still daily drive this car with no issues. Detroit Speed products upgraded the following: SS Solid rear cradle mounts, SS adjustable toe links, SS adjustable rear trailing arms. Also added was a Pfadt Rear Upper C-arm Poly Bushings w/ Sleeves and a Pfadt sway bar.Rear Diff was changed from 3:27 gears to 3:45 posiNGK spark plugs and Taylor 8.2mm Thundervolt 135 degree spark plug boots with boot protectors. Elite Engineering Tunnel Brace for stiffening of the chassis when that torque comes on, keeping the tires evenly planted.Forgestar F14, 20”, deep concave, piano black wheels. 10.5” rear and 9” fronts. Brembo brake calipers powder coated red.Sunoco COPO style hood with 4” cowl in the middle to give the Whipple extra breathing room. heritage Grill in the front ties it all together along with an SLP style front splitter. ZL1 rockers added to the sides in black and a beautiful Cyber Gray metallic dual SS stripe kit that runs bumper to bumper really make this car stand out. This Camaro resides in a state with a density altitude of between 6000’-7500’ (bad air) and with the Whipple set at 9 psi, with 20” wheels and street tires it still pulls off a 1.6 60’ and a 10.90 ¼ mile at 130 mph. If you were to put sticky tires on and turn up the boost it is easily a low 10’s high 9’s car all day long. Even where it’s currently tuned, this is one bad to the bone machine and will keep you smiling. It will also keep your rear end puckered along with white knuckles if you're not careful. Camaro was built to last and been babied & garaged it’s entire life. The paint looks good, the interior is clean. No rips, tears, or major scratches or damage anywhere. The entry threshold where you kick your legs in and out has a little scratching and wear on the kick plate but that’s normal. The exterior is beautiful and the interior is all stock. That’s right, stock interior with A/C and the works while running 10’s. You can drive this car in 100 degree weather without a worry. It is truly a streetable pro street setup. Take it to the track and run 10s, then go to a show and win a trophy and then take the wife or girlfriend out for an ice cream cone, what more can you ask for? People say old cars are better than new cars, muscle cars are better than new cars but you know what? Why settle for an old car with old brakes, old suspension, rusted floorboards and old technology when you can LITERALLY HAVE IT ALL? Speed, power, comfort, reliability, handling, braking, looks and sound. This is what you get with this vehicle. You literally get it all. Car could really use some new rear tires. DRAG RADIALS are the preferred tire since regular performance tires cannot and will not hold the power. The lower lip on the front spoiler has a few paint blemishes which is common for this area on all cars due to rubbing curbs, going through dips, etc. No one will notice this area when they see this car in front of them. Clean Title in Hand.