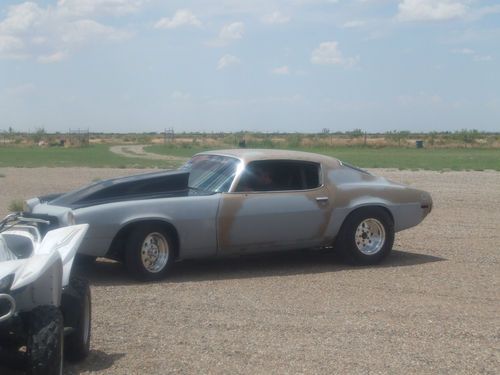 1971  Camaro street strip roller, NO ENGINE BUT DOES HAVE A TRANSMISSION . super solid zero rust southern body, can be street or strip, the body on this car is straight, original dash, the pic with the letters is a before pic, I have since sanded the letters off, fiberglass fenders, and fiberglass 5" cowl hood, i do have a pair of split bumpers for the car, all new front suspension, inc. new calipers dropped spindles, steel braided brake lines, moroso trick springs, energy sus, control arm bushings, new tie rods , new adj shocks etc..comes with a manual valve body t/h 350, 3800  installed in the car, msd 6al,,holley black fuel pump, russell inline filter, big block hooker super comp coated headers, 410 rear with spool, new wheels and front tires, good rubber in the rear radiator with electric fan, trans cooler..If your looking for a nice car to just slide your big block into, or small block if you have headers, you found it.. the cage in the car can be cut out and you can still put a back seat in it, new carpet, autometer guages, (tach in pic is not included), 2 race seats with cover, nice car just needs your engine and color. It comes with all headlights and all trim.