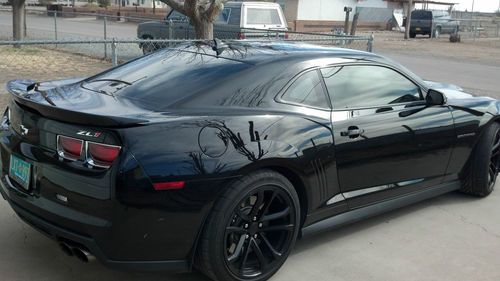 2013 ZL1 Camaro 580hp supercharged Black on Black.  Excellent condition.  I keep the car in a garage and that is the only thing in the garage.  I have never allowed anyone to eat or smoke in the car.  I take very good care of the car as if it was my baby.  The car is completely stock  and the only thing I have done to it are the black stickers on the Chevron emblem on the front and back.   I owned a 2012 Camaro SS and there is no comparison.  I do get tired of people always telling me of how nice my car is everywhere I go.  Once you drive a ZL1 you will never want to drive an SS again.   The car drives so smooth and the Magnetic Ride suspension works beautifully.  I am not going to say anymore, because if you don't know already everything about the car  then it's not for you.  PS I work for the government and due to some cuts in our pay I have to sell my car that I love so much.