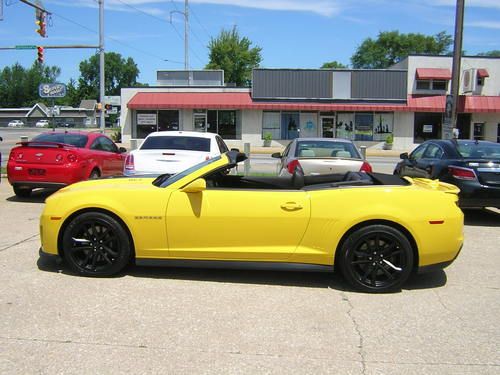 Less then 800 miles!!! Rally Yellow 2013 Chevrolet Camaro ZL1 convertible-Special ZL1 leather and suede dark grey interior. LSA 580 hp supercharged 6.2 V8, 6 speed manual trans, full powewr,tilt,cruise,am/fm with navigation, ZL1 black 20"rims,. This car has a rebuilt Indiana title due to very minor water damage. Just barely got the carpets wet. We cleaned and dried out everything. We inspected and have Driven this car about 300 miles. No issues and is in perfect shape. Save thousands off the retail on this rare car- Future collector car. CarFax available.

vin--2G1FZ3DP9D9802155
This car is for sale locally and we reserve the right to end this auction at anytime. A $500.00 deposit through PayPal required within 24 hrs. of the close of the auction . Certified funds only.
We are a registered Indiana used car dealer and have been selling vehicles like this for over 20 years . We have many repeat buyers and sell only quality vehicles.