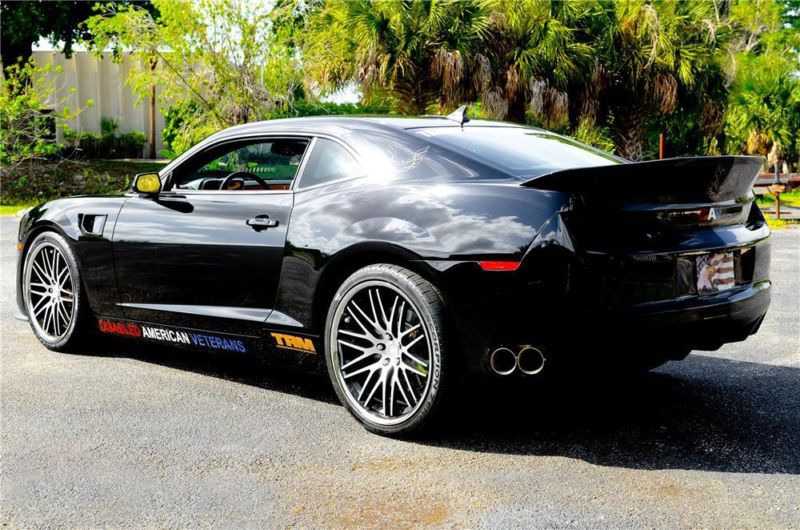 For more pictures email at: leslilwwest@seeksfriend.com .

This is the one and only custom built Disabled American Veterans Bandit Car as seen on the block at Barrett
Jackson in 2012. Here is a little wording taken from Automotive.com about this car. The 580-hp TAM Bandit
begins life as a Chevrolet Camaro and goes through
numerous engine, exterior, and interior enhancements, including a Magnaflow exhaust system, 22-inch wheels, a
"shaker" hood, an SLP suspension, LED headlights with "Angel Eyes," and an optional whipple supercharger, six speed
manual trans, among other parts. Most striking, though, is the Bandit's resemblance to Burt Reynolds' 1977 Pontiac
Trans Am from the iconic film, Smokey and the Bandit. In total, the build is a $30,000 conversion. The Freedom
Edition, though, received DAV embroidered logos in the interior, and a custom paint job. The Car ultimately
raised $150,000.00 at Barrett Jackson for the cause. This car has been highly modified, and is a true sight to
see. Car has 7000 kms. on it at present - approx. 4400 miles. The car is in as new condition, with the only small
issue being a small crack in the bottom front lower spoiler. A one-of-one custom built car for the Disabled
American Veterans. The exterior Veterans decals were taken off before the current owner purchased the car. The
original interior embroidery is still there for all to see. Please see all pictures. There are shots of the car
when it was at Barrett Jackson, and also shots of the car as it sits today, and when you pick it up. The car has
been sitting in a collectors collection but is time to pass it onto someone else who may be looking for an
investment. Very Special Providence in this car, and the history of the vehicle can be found throughout the
internet. Custom modified by TAM ( Trans American Muscle ). There were no Pontiac Trans Ams built this year, as
Pontiac was no longer in business. This is a true tribute to what the Trans Am may have looked like is it was
factory built in 2012.
Any questions,,please e-mail me.