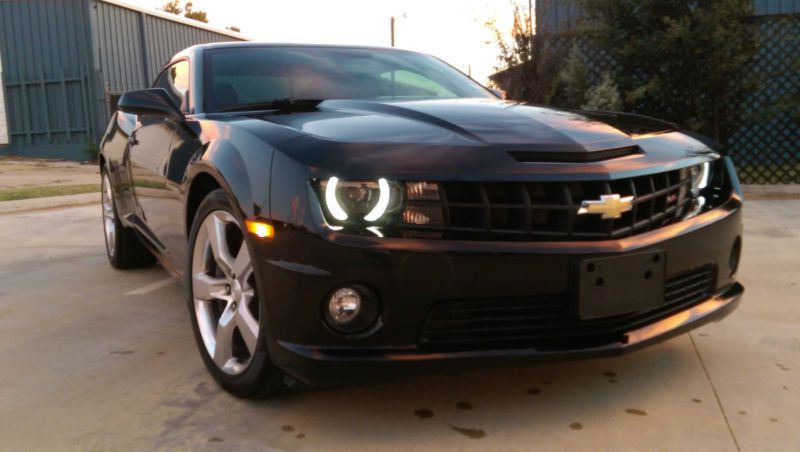 Just email me at: jeseniajccanarte@geordies.org . PERFECT - MINT - SHOWROOM CONDITION! - Garaged 100% - Weekend Car - Never even
driven in the rain!
6600 miles - yes, that's correct 6-6-0-0 miles total! It's literally a brand
new! I have 5 machine buffed weekends of waxing on this and its extremely
brilliant in person- almost glasslike finish.
KELLY BLUE BOOK
...lists this at a suggested $31,389 WITHOUT this milage OR any of the upgrades
below... (the lowest they went on milage was 20,000 miles)
...USERS 9.2/10 ... ROLL RATING 5/5
Brand new FLOWMASTER Aggressive Exhaust 40 - Now it sounds like it looks - mean,
aggressive, throaty +20hp w/combined air induction upgrade (GOOGLE IT - NO LINKS
ALLOWED ON EBAY)
Brand New K&N TYPHOON  Cold Ram Air Induction System 69 + 18hp
The K&N 69-4519TP Typhoon air intake system is a free-flowing, mandrel-bent
aluminum tube air induction system designed to fit some Chevrolet Camaro SS
models. The restrictive factory air filter and air intake housing are replaced
by the K&N Typhoon air intake which is designed to dramatically reduce air flow
restriction as it smoothes and straightens air flow. This allows your engine to
inhale a larger amount of air than the factory air intake. More air means more
usable power and acceleration throughout the engine’s RPM range.
*PIRELLI P-Zero Offset Tires, OEM Stainless Wheels @19'
** Blackout Window Kit
***3 Year Extended Warranty as desired and current as of 9/14...
Top of the line OEM digital package with BluTooth, Premium Sound, all leather,
stitched trim and "SS" logos in headrest, LED door panels matching the aqua/red
accent colors - its spotless inside and out! I am a bit OCD with all my cars and
this is beast of an SS. Black on Black, black out kit on badges, brand new Flow
Master Exhaust and K&N Typhoon Cold Ram Air Injection, spotless engine, etc...
see pic's
Also Included in deal:
OEM Exhaust System from Pre- FlowMaster Upgrade
OEM Air Induction - Pre K&N Upgrade
Questions?
Ask away... just know its top of the line and you will not find a 2011 SS like
this anywhere. Perfect modified street machine for weekends OR a daily
driver...  its a beast and a head turner.
I have all papers in proof of upgrades, date stamped.