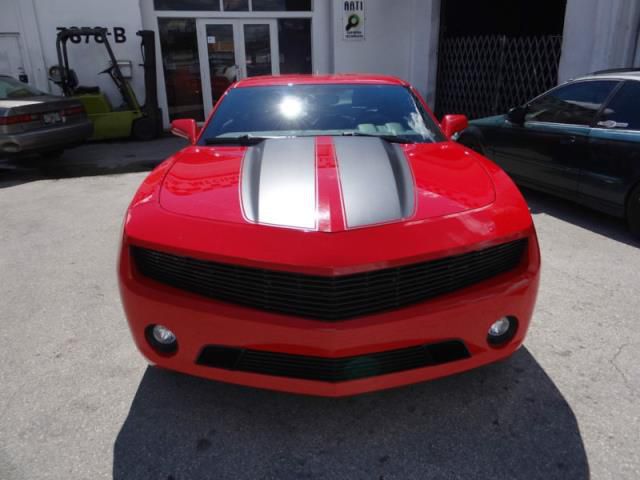 Excellent condition 2011 Camaro V6 6 Speed. Originally an LS car. Paint is in very good to excellent condition, has a few road chips and some very minor dings (almost unnoticeable). Factory red exterior, with the factory black cloth seats. Highway miles, car is driven 70-80 miles a day on the turnpike. Has never been raced or abused. Adult owned, non-smoker. Everything works. Has factory spare tire. Upgrades: - Has 20 inch Camaro SS wheels, that came off a 2010 SS, these are original GM wheels not reproductions. Wheels were painted flat black and do have a some scuffs on them (easily painted). Has BFG Comp T/A tires, with good tread. - SS flat black stripes. - SS rear spoiler. - Street Scene upper and lower Phantom Grille. - Front fog lights. - K&N Typhoon air intake kit. - Husky Liner floor liners. - Professionally tinted windows. 35% Florida legal. Owner of the car has an auto repair shop and all maintenance work has been performed there. All oil changes have been done as soon as the vehicle has required them, with Mobil 1. Car is currently financed through a local credit union and the title is held by them. Once the vehicle is paid off the title will clear and we will overnight it to the new owner. For question or if you want to see the car in person call 305-231-3388. Car is in Zip code 33016