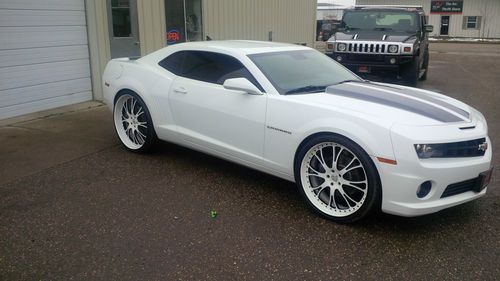 UP FOR SALE IS A VERY UNIQUE CHEVY CAMARO SS SITTING ON 26sX10 ASHANTI IN THE REAR 24X9 IN THE FRONT WITH LEXANI TIRES 255/30/24 IN THE FRONT & 275/25/26 IN THE REAR THEY DO NOT RUB AT ALL,BREMBO BRAKE KIT FRONT AND BACK ,FULL EXAUST WITH DUAL PIPES,PIONEER DOUBLE DIN DVD XM RADIO,TINT,COLD AIR INTAKE,REMOTE CAR STARTER.CAR REALLY IS A ONE OF A KIND RUNS EXCELLENT,MUST SEE CAN ARRANGE SHIPPING TO ANY STATE....ANY QUESTION CALL G4 AUTOSPORT 7012203388 ASK FOR EVON OR JILL...GOOD LUCK