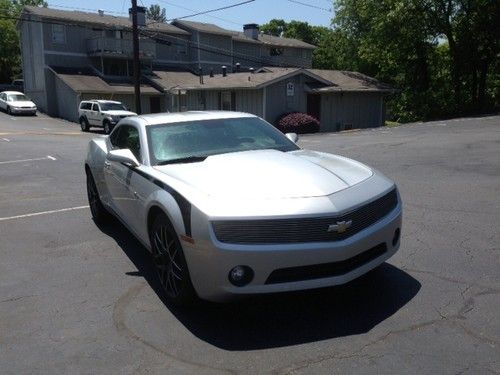 The Camaro has a Phantom Grill; Custom paint job; rear spoiler; bucket seats; K&N Typhoon cold air intake; Hurst shifter; Falken 20 inch wheels; new Hankook V12EVO tires on the front;  Dynomax rear back exhaust; and remote start.  It has heated front seats, Boston acoustics premium 9 speaker audio system and sport bucket seats.  It was fully serviced at 50,000 miles and new front brake pads installed. EPA fuel economy estimate is 18 MPG  city and 29 MPG highway. It has two burn holes on the console (see Picture) and a small hole on the seat where I sat down with pliers in my pocket. This car belongs to my grandson who just lost his job and whose wife had a baby all in the same week.  Otherwise, he would not be selling the car.  It is very sharp and his dream car!  For further information, call 501-766-3221 for more information.