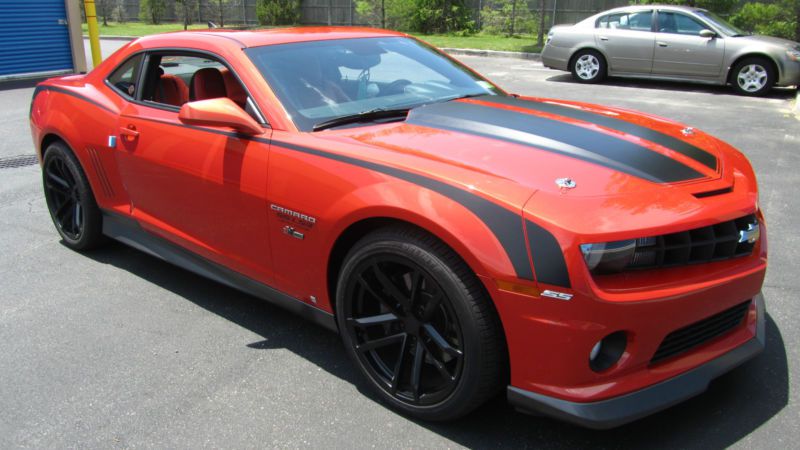 Just email me at: rosarddanner@ukcarriers.com .
2010 Chevrolet Camaro 2SS with a 6.2 LTR and a 6 speed manual transmission. Vehicle is a specifically ordered
"Inferno Orange" edition, equipped with three appearance stripe packages and factory ground effects. Every
possible option, including a sunroof. This vehicle ha tinted glass SLP Catback exhaust sytem, Hurst badging along
with a short-throw shipter and performance intake, otherwise factory stock. This vehicle was purchased by me at
approximately 1900 miles after the first owner went through a financial hardship. It is in excellent condition,
professionally maintained and adult driven its whole life, which is now accounted at only 26,930 miles. It is kept
in its own immaculate garage storage unit and always locked away. It does not have a single dent or ding anywhere.

As you can see from the pictures, I have installed a set of reproduced ZL1 staggered rims and tires which I
bought new about 6,000 miles ago. They are in "like new" condition. The original factory polished set of wheels
and tires will be included with the sale along with the original floor mats and stock airbox unit.