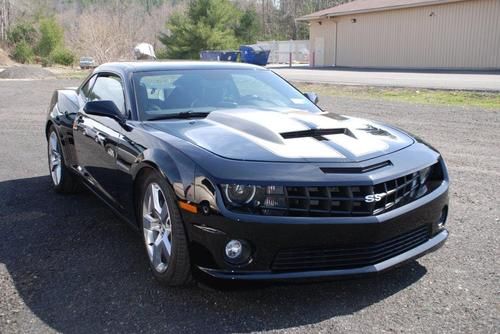 With help from the pros at SLP performance, and over $52000. invested, this 2010 Camaro SS is a King of the street Supercar with Top speed shutoff of 208 mph! with a 11.17 sec 1/4 mile test. This car can also handle the daily commute like a champ with 24mpg highway. The 63 year old gentleman selling this car is a friend of mine. 1 owner with 7306 miles. I have all receipts for tvs 2300 intercooled supercharger, 65lb injectors, suspension, sub frame connectors, shorty headers, 3" exhaust, cowl induction hood, painted stripes, Dyno tuning sheets from SLP. 631 flywheel hp. Also included a custom poster for displaying at car shows. The window sticker is included and listed for $37165 plus almost 15k in receipts. Has a clear title in hand. This car is faster than a 2013 Camaro Zl1 and a lot less $$$!! He is now buying a street rod for a retirement project. Time to let go of his pride and joy.