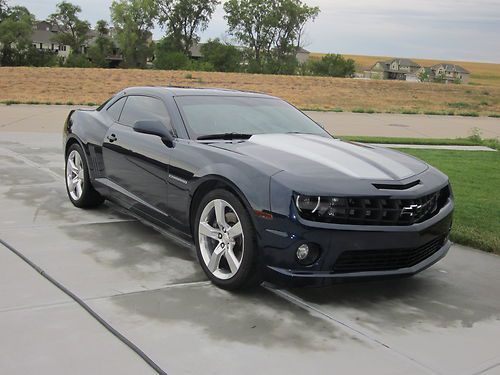 Condition: Used: A vehicle is considered used if it has been registered and issued a title. Used vehicles have had at least one previous owner. The condition of the exterior, interior and engine can vary depending on the vehicle's history. See the seller's listing for full details and description of any imperfections. ...
2010 Camaro 2SS for sale, imperial blue metallic with factory silver racing stripes, leather heated seats, manual transmission, 426 (factory) horsepower, two tone gray/light gray leather interior, RS package, rear spoiler, clean interior, 3M protective film on the front and sides, no dents nor dings, 22,800 miles (and still driving it), still under factory warranty, very clean and well cared for.  As far as I know, it has never been in any wrecks and has not had any body work done.  I am the second owner (first owner was a woman) and it has been driven very responsibly since I have owned it.  I wash and wax it very regularly and I am not aware of any imperfections.
THIS IS THE LAST TIME I AM LISTING IT.  IF IT DOESN'T SELL, I WILL JUST KEEP IT.
$500 deposit due within 48 hours of sale and remaining amount within 10 days of sale.
The AutoCheck report is clean and there is no history of accidents, title issues, etc.  Someone asked about the 8 records found, these are all for the vehicle registrations, and the title transfer from the previous owner and from me.  Like I said, it is 100% clean and I can email you this report if that would make you feel better.  Thanks.