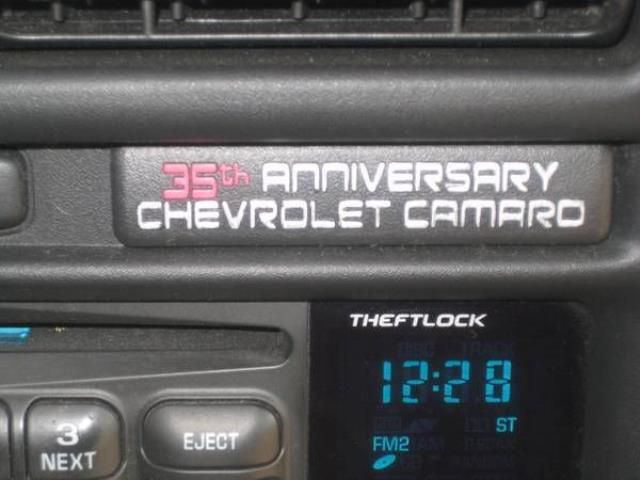 Summer is Coming!!! 2002 Chevrolet Camaro Z28 Convertible. This is the 35th Anniversary Edition which includes an all-aluminum 5.7L V8 LS-1 Corvette engine. White exterior/top and black leather interior. Automatic, ice cold AC, cruise, power convertible top, power windows, power door locks, power mirrors, power driver side seat, power trunk release. The original owner installed Flowmaster exhaust and I added C&N Cold Air Induction. I just added new headlights assemblies. I still have the old ones. I had them professionally wetsanded but they were still not brilliantly clear so I bought new ones.....the old ones are available. I also have seat covers that have been on there for a few years now to protect the leather seats which are in very good shape with the exception of the driver seat base that has some cracking. I also have a car cover. I just checked the MPG and I went 60 miles on the freeway on 2.42 gallons. That's 24.9 MPG!! This is a two-owner car that was purchased in Florida and has been here ever since. Never seen snow or ice or SALT!! It's an enormously capable car....the speedometer goes to 155 but I've never seen anything over about 110. It runs at 2000 rpms at 80 mph. Lots of fun to drive. Looks great and sounds AWESOME. The sound is what got me to buy it. And that you NEVER see another car just like it....try that with a mustang gt. I may be available to deliver the car on it's wheels for the price of gas.