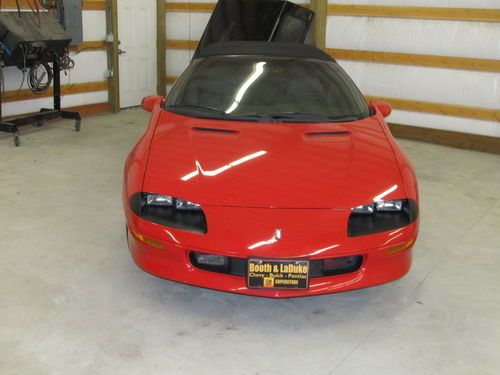 This is a 1996 Chevy Camaro Z28 convertible. It is a one owner car with only 50,195 miles on it. This car has been in covered storage its entire life. It has never been driven in any adverse weather conditions. This car has a bright red exterior, with a dark gray leather interior. This car has the 5.7 liter V8 engine with a six speed manual transmission. This package produces 305 horse power and 325 feet pounds of torque. This car gets an EPA estimates 15 city and 24 miles per gallon on the highway, which is awesome for a pony car like the Camaro! This car is a lot of fun to drive! There is nothing like lots of horse power with a manual transmission!
This car is in like new condition inside and out. It is very loaded up with features. It came with leather bucket seats, center console, limited slip rear differential, power brakes, power locks, power windows,, rear window defroster, chrome 16 inch wheels, 6 speed manual transmission, tachometer, 4 wheel anti lock brakes, driver and passenger front airbags, power steering, tilt steering wheel, air conditioning, intermittent windshield wipers, rear spoiler, leather steering wheel trim, fog lights, keyless entry system, lighted entry system, anti theft alarm system, power exterior mirrors and an AM/FM/CD audio system. This car literally has every option that it could be ordered with in 1996.
This car is in like new condition, so if you are a rare Camaro collector then this is the one for you! This is a one owner car that has been taken care of beyond belief.
Please call Kris LeCaire at Booth and LaDuke motors today to set up an appointment for your test drive!
(509)563-2920 Cell Phone
(509)684-8400 Office Phone
No one works harder to put you into the car or truck of your dreams!