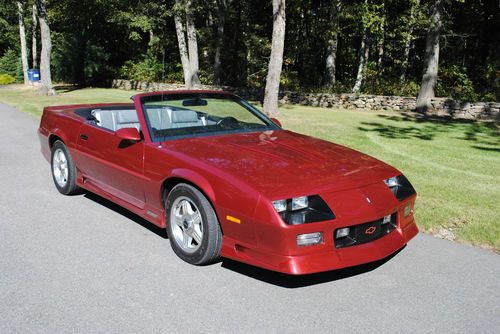 I bought this car in the fall of 2011 from a friend's mother. My friend's father ordered this car in late 91 to early 92. He ordered this specific car because he was recovering from cancer. When the car finally arrived his dad didn't have long to live because his cancer returned. My friend's father rode in this car 1 time and passed away 4-5 days later. Since then, this car has sat in a climate controlled garage in Marietta, Georgia. The car has only come out of the garage for an occasional drive by his mother.

The car had 10,600 miles on it when I purchased the car. As of June 2013, it has 12,200 miles. I shipped the car to Rhode Island, where it currently resides. Prior to driving the car, I drained the gas tank and installed new GM injectors. Everything else on the car is all original.
As you can see in the pictures, it is deep red with grey leather interior with a black top. It’s powered by a 305 T.P.I. V-8 with an automatic transmission. The car has power windows, power driver seat and power locks. I have all the original paperwork that came with the car in 1992 including a cassette tape for the owner of the car still wrapped in its original cellophane paper.
This car has an open title.
As the car is listed locally, I reserve the right to end this auction early due to a local sale.
Please feel free to call or email me regarding this vehicle. I'd be happy to answer any of your questions. (4o1)seven41-fourfour54
A deposit of $500 must be paid within 48 hours of auction close. The remaining balance must be paid within 5 days of the auction close. Bank check or cash only.