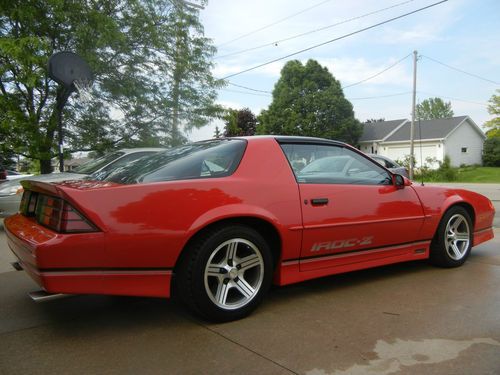 This car is in excellent condition! has been garage kept and maintained since owned, engine had been been completely rebuilt at 94K, put in an acid bleeding case and restored to new condition, block was bored to 355, forged steel crank, light weight pistions, balanced crank and pistions, milled and ported heads, ported pendulum, port matched runners, polished cam, Mas air screens removed, lower air box removed, thermomaster stage II chip, under drive pulleys, removed smog pump, removed cat, edlebrock hi flo water pump, bosch triple platinum plugs, over 5000$ in for GM engine rebuild kit, Rebuilt 700R4 trans, upgraded servo, B&M clutchs and B&M shift kit, Custom weld mounts for trans, heavy duty U joints aluminum drive shaft, Richmond 3:45 rear gear ratio, carrier and bearings, Flowmaster American thunder hard welded exhaust, 5000$ pro custom paint job done by YACH 's body and custom, brilliant red color, this paint job looks amazing a really sets this car apart, all door handles and t tops and eye lids are gloss black instead of factory flat black, refinished N96 16 " iroc wheels,245/45R16 ZR1 fusion tires with less then 3000 miles on them,chrome valve stems, new 92 style hood blisters and bowtie grill, KYB shocks, struts, Eibock lowering springs which lowered the stance 1 1/2 inch in front 1 in rear, new brakes, Has Ungo Alarm system installed with keyless entry, the car runs and drives like new, very tight and responsive, the interior is in great condition as well, some wear on driver seat and steering wheel, but over all very clean, has a d mask kenwood cd player with remote, with new kenwood speakers in dash and sail panels, has a cadence amp with a 10" sony sub woofer box, leather T-TOP bag, only issues with the car are the ac stopped blowing cold air , the compressor works fine, I believe it just needs to be recharged , from sitting most of the year without been driven, the gas gauge works intermittent.. lose wire on sender unit, also the speedometer is off about 15 miles and hour due to the gear change in the rear axle I have the replacement part for it but have not installed it will leave it in the car. lots of recipts for work done, Great car for the year and hard to find in this condition! Good luck bidding and thanks for looking.