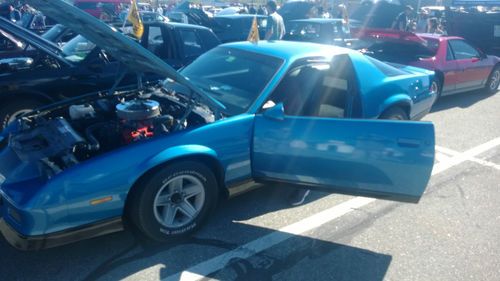 Condition: UsedA vehicle is considered used if it has been registered and issued a title. Used vehicles have had at least one previous owner. The condition of the exterior, interior and engine can vary depending on the vehicle's history. See the seller's listing for full details and description of any imperfections.Seller Notes:"This Vehicle is Sold As Where Is with no applied warranties. RUNS and drives LIKE A WHEELMANS DREAM."

THIS CAR HAS OVER $10,000 invested in rebuilding the suspension and drive train as well as new paint and tires. the 305 rebuilt engine really purrs at 300 horse power,. 373 POSSI REAR END 3INCH CUSTOM STAINLESS STEEL DUEL EXHAUST EIDELBROCK INTAKE THUNDERBOLT CAT. CONVERTER (SUMMIT INTAKE) HYDRAULIC ROLLER CAM, REBUILT 305 VORTECH HEADS NEW WIRES-CARB. T700 TRANS.HOLLY 660 CARB SINGLE PUMP DUAL FED ELEC. FUEL PUMP WITH FUEL PRESSURE GAUGE CORVETTE SUSPENSION NEW BUSHINGS,BATTERY, STARTER ,ELECTRIC FAN and so much more LIGHT. FACTORY WINDOW TINT ON FRONT AND REAR PROF. INSTALLED SIDE TINT **TEXAS CAR!! NO RUST NO UNDERCOAT 4 PRATICALLY NEW TIRES ASWELL. PLUS OUTFITTED WITH KENWOOD HEAD UNIT AND SPEAKERS. This car needs nothing and is ready to go and will be sold for the best offer to many toys must go, My son wrote the first description and some times he gets over excited