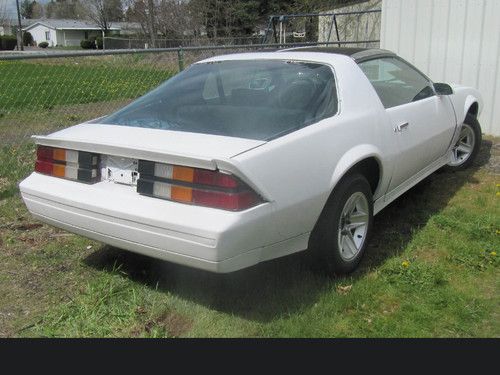 Rare find - Authenticated 1982 Camaro Indianapolis Pace Car model - one of 366 Pace Car vehicles that left Chevrolet with a 4-speed! This 1 of 366 car was built at the Van Nuys Plant in the first week of March 1982 - almost all Pace Cars were March and April builds.

This car is a running driving project with numbers matching 305 4 bbl and original 4 speed, it has the original 26G Blue and Silver Pace Car specific interior. While the seat covers are a bit ripped and the headliner and a couple of hatch area trim pieces are missing - these can be provided by most any junkyard donor car and the seat covers are available from Classic Industries.

The body is fairly strait but has an issue that the nose has been replaced (likely from a past fender bender) with a base model and will need a Z28 nose piece reinstalled, it also needs love on the drivers side door as the hinge is just starting to sag, also the passenger outside door lock is non working (locks OK from the inside). The door jams are still the original 16U 16L "Indy Pace Car" Silver - but sadly someone sprayed the exterior a non standard white.

I will help with delivery - but I am no expert and the expenses of delivery are up to the buyer. I will expect contact from the buyer soon after the auction ends - my reserve is quite reasonable.

The car is also for sale locally and is subject to the auction ending at any time.

Added: May 13 @ 9:30 Pacific: I have been in contact with a previous owner likely four or five before me - he has verified for me that the Pace Car was 16U 16L "Indy Pace Car" silver when he owned the car and did have remnants of the blue vinyl striping around the lower part of the car at that time.

My reserve is only 2000 and if the car reaches that I will withdraw it from the local market and let this auction play out - I have been a member of eBay for over a decade and have built a good reputation by keeping my word.