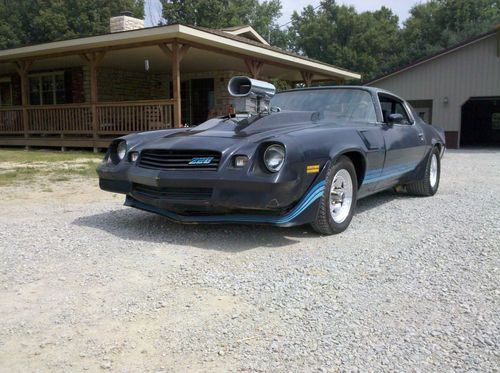 I am offering for sale my 1980 Z/28 I have owned and garage kept the car for about 18 years. The car has sat for about 10 years. It does run but you must consider it has sat for a long time. It has a lot of good parts on the car like 12 bolt 4:11 posi, B&M race trans with 4500 stahl, Aeromotine 5/8 return style fuel system, frame tied, 427 SHP 4 bolt studded block, BDS Blower, Predator Carbs, Forged crossdrilled crank, dimple rods, venolia 8:0 to 1 pistons, crower roller, GM 074 aluminum heads ported and polished, ss valves tiatanium retainers, fluidamper, griffin radiator, mezier waterpump, solid body ( very very little rust on pass rocker about 1 or so diameter and a littler rust on rear valance where factory exhaust exited, Big cowl induction hood, factory hood also, interior is poor, autometer guages, b&m shifter, to much more to list. I am totally getting out of muscle cars and have a few other BBC items that is thrown in the trunk to go with it. Edelbrock intake , roller rockers, ARP bolts, drive shaft loop, etc.The 3 pictures are when it was taken from the concrete floor barn, after power washed and a pic of the engine. If you want more pics email me. The car is being sold as is! It has sat for a long time. As far as I know there is nothing major wrong but I am not promising there isn't.