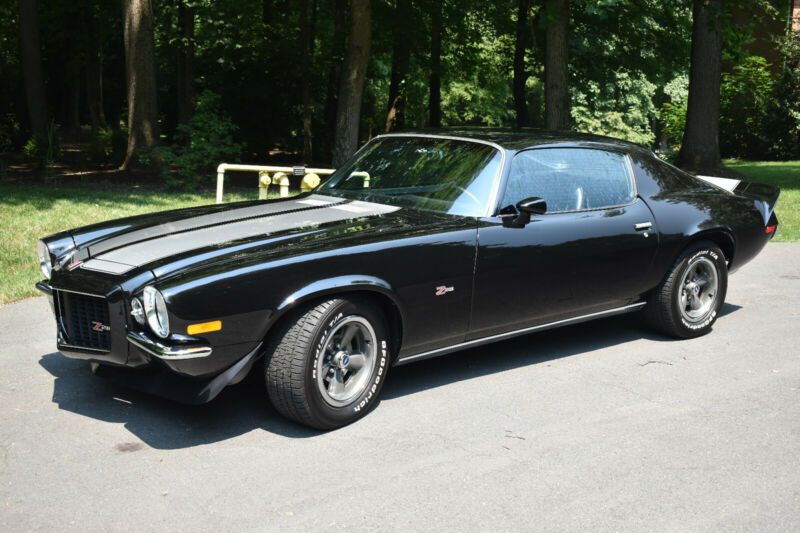 Up for sale is this immaculate and recently restored numbers matching 1973 Chevrolet Camaro Z/28. This is a rare model Z/28 because it has factory A/C, (which does work). This is the first year for a Z/28 to offer A/C as an option.

The car was totally disassembled, and soda blasted before any work was performed. In the way of bodywork both the
trunk & interior floor pans were replaced, a section of the rear frame, and the right rear quarter panel. The body
was then put on a rotisserie and painted in a 2-stage urethane black w/silver stripes (under the clear). Although
not an original color, the black definitely shows off the quality of the work and straightness of the body.

The interior had new carpeting, upholstery & foam, and headliner. The original gauge cluster (which does come with
the car) was replaced with a Dakota Digital unit. The speedometer and other gauges function normally except the
odometer. Please note that some of the plastic interior pieces were not replaced and show a little age. Items
like the shifter cover, face of the gauge cluster, and some of the window trim.

All of the wiring is original, and the lights turn signals, etc. function normally. LED headlights were added.
The originals are included. As mentioned, the A/C does work and blows cold air, but the switch works only on two
positions. Off and high

As far as the 350 c.i./175 h.p. engine, Turbo 350 transmission, and 10-bolt rear differential, they appear to be
numbers matching to the car and documentation shows they were rebuilt by the prior owner and have approximately
15000 miles on them.

Additionally, a set of 4.11 posi-traction gears were added by one of the prior owners. Speedometer has been
calibrated for this gear ratio.