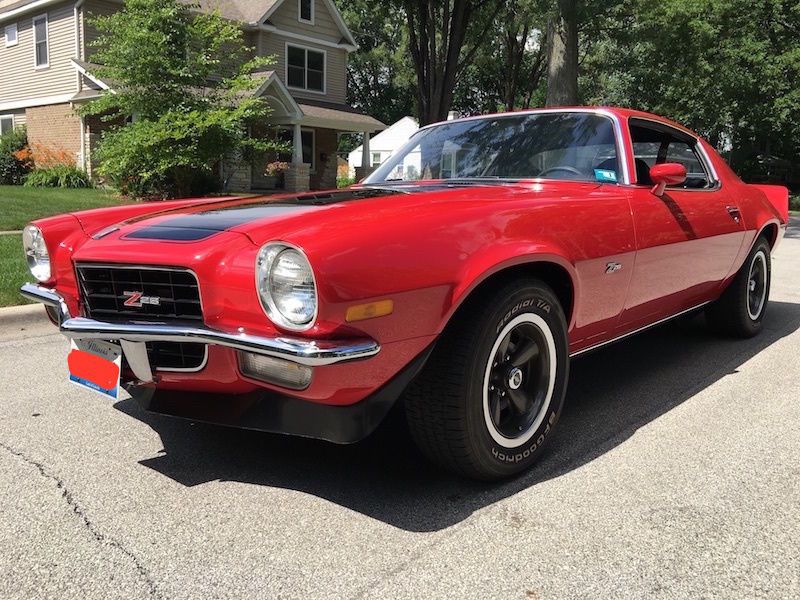 Please email me with any questions or requests for additional pics or something specific at: lucrecialhhiggons@freeolamail.com .

This is an excellent opportunity for vintage Camaro collectors. 1972 Z28, four speed, with some rare factory
options. Same owner since 2002. Originally an Oklahoma car. Still has 1978 Oklahoma inspection sticker affixed to
original windshield. Runs and drives as well as it looks. Impeccable repaint of the original Cranberry Red finish
with Black stripes. All original glass, chrome, stainless, and interior. Undercarriage is primarily original.
Odometer reads 50,942. There is no documentation, but the owner history and condition of car indicates this is the
original mileage. Less than 800 miles logged since 2002. Since the repaint, only driven to exercise the mechanical
components and driven to a few shows and cruises. Otherwise, stored in a secure garage. One of less than 1,000 four
speed Z28’s manufactured in 1972. These don’t come up for sale often, as the extremely low production numbers
classify them as rare examples. This is one of the nicest 1972 Z28’s you will find for sale that have only
undergone partial restorations and maintained most original components in unmolested form.

As stated above, dry Oklahoma car most of it’s life. All original body panels are laser straight. This was a
frame up restoration, due to the excellent condition of the car. Body was disassembled, all panels were massaged
and prepped, and refinished in the original factory code 75 Cranberry Red with code YF8 Black stripes. The quality
of paint would be accurately described as excellent. The finish is uniform. No irregularities. No blotches or
uneven shades or hues. Buffed to a mirror gloss. Hours were dedicated to aligning and fitting all body panels.
Please look at the file of photos. Fits and gapment are precise and excellent. Bumpers are original and in
excellent condition. Remaining original chrome, stainless, emblems, and brightwork also in excellent condition. D80
front and rear spoiler. Original tinted glass is in excellent condition. Dual color keyed sport mirrors. First year
for the course grille mesh, and grille is in great shape. Z28 five spoke sport wheels have been refinished, with
trim rings and center caps. BF Goodrich Radial T/A tires, P235/60R15. Z21 exterior style package- Body colored door
handle inserts, bright accented parking lights, headlights, and backup lights. Bright accented window, body, sill,
and hood moldings.

The heart of this beautiful Z28 is the 350 Cu. In. LT1 engine built to LT1 specs. Correct 3970010 casting number,
but not the original block. Casting date is L58, indicating a four bolt main block built for 1969 production..


This engine was rated back in 1972 at 255 HP. Keep in mind, due to more stringent insurance and government
regulations, GM started publishing net horsepower ratings, taken at the rear wheels with all accessories installed.
Previous years used gross horsepower, taken at the flywheel with no accessories installed. Therefore, even though
the HP did fall off a little bit on paper (also due to reducing compression from 11:1 to 9:1), the Z28 still had
plenty of power. For comparison, the 1972 396 was rated at 240 HP.

Eleven inch heavy duty clutch. Muncie M21 four speed transmission. Ten bolt rear differential with optional 4.10
gear with posi traction. Aftermarket bolt on adjustable traction bars have been installed. Original F41 suspension
with heavy duty shocks and springs. Rear stabilizer bar. One inch front stabilizer bar. Power disc brakes on the
front, drum on the rear. Manual steering. Undercarriage still displayed the original factory undercoating. At the
time of the repaint, the restoration shop put the car on the rack, cleaned and touched up the undercoating. The
idea was to adhere as closely to factory appearance as possible.

Complete interior is original, with the exception of the carpet and sill plates. When the car was repainted, all
the seals, weatherstripping, and jam seals were replaced. The quality of paint in the door jams and inner doors is
the same as the exterior of the car. Also, look at the photos of the bottom of the doors. Seats, door panels,
headliner and package shelf in excellent shape. Dash and dash pad also in excellent condition. Remote driver
mirror. Factory AM 8 track stereo. 6,500 RPM redline tachometer. 130 MPH speedometer. Fuel, amps, water temp
gauges. Clock. Stewart Warner oil pressure gauge installed under the dash. Hurst shifter. Remote trunk release
located in glove box. Factory sport wheel.

This beautiful Z28 would be a valued addition to any Camaro enthusiast’s collection. Search the internet. Very
few 1972 examples are offered for sale, due to rarity and low production numbers. Don’t miss this opportunity.