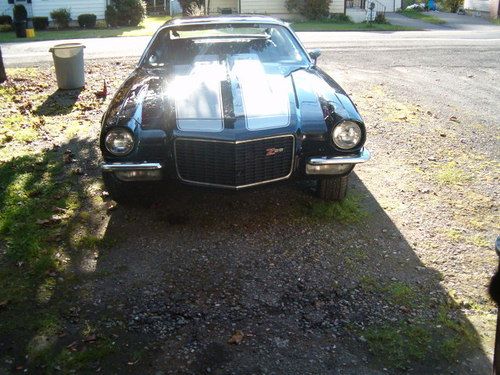 !971 Camaro 383 stroker motor,4 speed ,black silver stripes.Car has all new front sheet metel,and quarters. Doors were sand blasted but some one left the glass in them when they did it. I might have one window to replace . There not bad just hit the edges. The car has the original floors and truck pan. Frame is good car is all clean and painted underneath. Has new brakes tires front end alinment  Carb is rebuilt, New paint,dash,console. The seats were recovered and new door panels panels have some scratches in them this car was sitting for years when I found it.I don't know much about the motor it was in it when I bought it. It was an original 4 speed car some one had an auto in it. I put a t 10 out of a trans am in it. New clutch fly wheel and all clutch parts are new. All the emblems are new .Has new full exhaust  Paint is not perfect but it is a good paint job. Car needs some minor thing finished. Gauges need to be hooked up Head liner is new but not put in good.I think idash bezel is cracked it needs a new key some times you have to turn it a few times. Starter is new. Wheels are Z28 wheels all redone.New alm radiator This is a nice car I am just looking for a hot rod .you can call me if you have any questions 607 760-9499 im putting a buy it now or best offer. I reserve the right to end auction car is for sale locally Im sure I missed a few things lots of new stuff on the car.Would not take much to get it in tip top shape just a little time Has a clear pa title Car must be paid for with in 3 days of end of sale