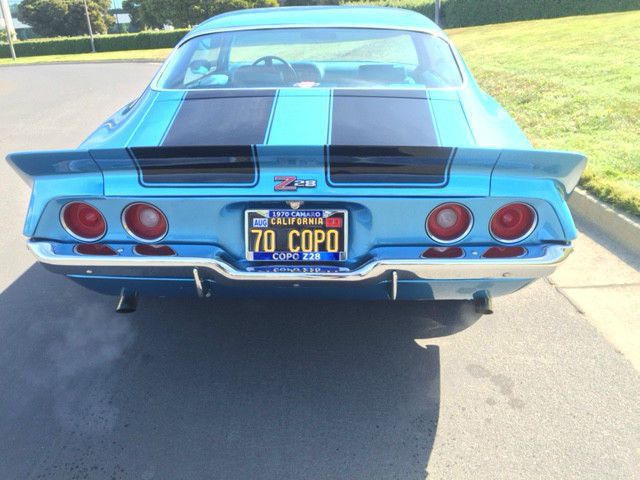 This all numbers matching Z28 COPO has been certified by Jerry MacNeish as one of less than 8 known to exist with
all original build sheet to prove authenticity (see pics below). Many claim to have the rare COPO 9796 option but
without original buildsheet or window sticker (as seen here) it's simply hearsay. This Z28 COPO Special Race
Spoiler package for the 1970 Camaro was designed to allow Chevrolet to continue to dominate the SCCA Trans-Am Race
Series. After testing the standard issue D80 short spoiler showed significant lift at speeds in excess of 120MPH.
The new COPO 9796 high spoiler helped down force at higher speeds and was a significant improvement in the areas of
stability and cornering traction in SCCA Trans-Am racing series. In order to comply with SCCA race rules, a limited
number of these cars were built in late April 1970, and starting in June, also included the front spoiler as part
of this package. As shown on the buildsheet and documented by MacNeish, this car was built in late June of 1970.
This example originally finished in Mulsanne Blue, with the optional deluxe blue interior. This COPO Z also retains
its original "born with" LT1, TH400 automatic transmission and 3.73 posi rear. The list of options from the factory
per the buildsheet and MacNeish is as follows:
*Very rare and true Z28 COPO example.
COPO 9796
U80 Rear Speaker
U76 windshield Antenna
U63 AM radio
U35 Electric clock
U27 Glove box lock
U14 IP Gauges
N40 Power steering
N10 Dual exhaust
D55 Console
D35 L and R side mirrors
B42 Luggage comp mat
A01 Tinted Glass
AS1 Standard front horn
M40 Special 3-speed automatic transmission
J52 Disc Brakes
Z87 Deluxe Interior, blue with black comfort weave
G80 Positraction, 3.73 ratio
F41 Special Performance Suspension
D80 Spoiler equipment, superceded by COPO 9796AA three piece spoiler (Includes front spoiler equipment as well)
Z28 Special Engine and equipment
Since MacNeish authenticated this car nearly a decade ago, we've done a lot to get it to the next level, we painted
the car in it's original mulsanne blue with black stripes per build sheet, along with redoing the interior with the
rare correct comfort weave blue with black deluxe interior (sourced the last of the original fabric). We
refurbished the wheels and added the original bias-ply F-60 Firestone wide ovals. This is a rust free car with all
original sheet metal still on the car. The engine has never been out of the car and since she runs amazing as is,
we've opted to keep much of the engine bay original at this time, though as you can see in the pictures, is very
presentable as is. This past summer, we were pleased to have her accepted to the prestigious Hillsborough Concours
D'elegance where the COPO Z placed 3rd in class! (5 point deduction for no fire extinguisher in car, otherwise we
would've placed 2nd or perhaps 1st!)